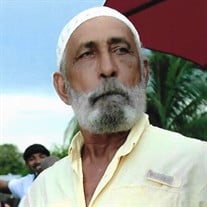 It is with great sadness, we announce the passing of Norman Gabourel on July 7th, 2020 at the age of 69. Norman was born in Belize on April 14th, 1951. He graduated from St. Michael's College. At the end of his formal education, he became a Surveyor working for the Lands Department for the Belize government, where he left an indelible mark on the country by leading a team that designed and built the Northern Highway. Norman became one of the most sought after civil engineers in the country during this time when he decided to move to the United States in 1971 to start a new journey. He held several positions with both private firms and public institutions during his formative years. He later graduated from Pierce College in California with a degree in Animal Husbandry. Norman moved to Florida in 1989 to embark on a new path. He started a new career in the marine industry as an Offshore Crane Operator working for an industry-leading global logistics service provider. There he held positions of progressive responsibilities until he retired. In 2009 when Norman retired to Belize, his passion turned into perseverance and he started a new agricultural business and enterprise. Norman loved to travel and explore new places and locales. Adventuring cross-country and international locations with his family and friends. He was self-taught in architectural and building construction. He designed and built numerous homes, additions, and projects. He enjoyed music of all genres. And he always had a funny joke to tell. He was a visionary that would evangelize a prophetic message of wisdom to his loved ones. Predeceased in death by his daughter Rochelle Gabourel, parents; Austin and Gwendolyn Gabourel, his nephew Kevin Arnold, son Joshua Gabourel, and daughter Debbie McLaughlin. Survived by his wife, Claudine Gabourel, son Matthew McLaughlin, daughter Rosemarie McLaughlin, daughter Tirzah Gabourel, and step-daughter Dominique Drummond. Along with grandchildren; Keilah and Amira. Brothers Sydney, Douglas, George, Austin, Derek. Sisters Marilyn, Dorothy, and Marge. And a host of nephews and nieces too numerous to name. Burial will take place at Our Lady Queen of Peace Cemetery where he will be laid to rest in the family plot next to his parents, nephew, and son. His family and friends loved him dearly and he will be missed by all

It is with great sadness, we announce the passing of Norman Gabourel on July 7th, 2020 at the age of 69. Norman was born in Belize on April 14th, 1951. He graduated from St. Michael's College. At the end of his formal education, he became a... View Obituary & Service Information

The family of Norman R Gabourel created this Life Tributes page to make it easy to share your memories.

It is with great sadness, we announce the passing of Norman Gabourel...