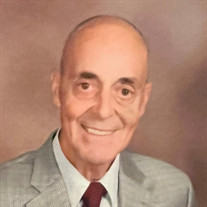 Nicholas (Nicky) W. Babzien passed away peacefully and was called home to heaven on Sunday, March 27, 2022, at the age of 90. He was born on May 11, 1931 in Munich, Germany and emigrated from Germany to the United States in June 1952 and was hired as a chef at the Savoy-Plaza Hotel in New York City. Nicky was inducted into the Army in May 1953 and served in the United States Army during the Korean War Conflict and Army Reserves until his honorable discharge in 1961. In 1955 Nicky was recruited by Pan American World Airways and flew with them until 1991. During this time he was an In-Flight Purser and an instructor at the Pan Am Flight Service College in Miami. In 1992 he transferred to Delta Airlines until his retirement in 1997. Nicky met his wife, Vera, in 1957 in New York, where she was living after being recruited by Pan American in her home country of Norway. In his retirement years, they enjoyed traveling to Germany and Norway visiting family. Nicky and Vera celebrated 62 years of marriage on February 6, 2022. All through his married life he was an active member of his church, assisting the pastors, singing in the church choir and serving as an usher in both Long Island, New York and Hollywood, Florida. With his willing heart and hands, smile and good nature, he served the Lord for many years. He became a member of Divine Savior Lutheran Church in West Palm Beach in 2021. He will be deeply missed. Nicky is survived by his wife Vera, née Nicolaysen; daughter Sharon B. Joiner of Coppell, Texas and husband Gordon; daughter Cynthia H. Babzien, PhD and Luis Collado of Loxahatchee, Florida; granddaughter Viktoria Elisabeth of Loxahatchee, Florida; sister-in-law Brigitte Babzien of Smithtown, New York; brother-in-law and sister-in-law Rolf and Berit Nicolaysen of Oslo, Norway and extended family in Germany and Norway. He is preceded in death by his parents Heinrich Babzien and Anni Babzien, née Vater; brother Werner Babzien; Aunt Lisl Babzien of Munich, Germany; Aunt Viktoria Vater of Munich, Germany; father-in-law and mother-in-law, Arthur Nicolaysen and Ruth Nicolaysen, née Wilhelmsen of Oslo, Norway. A private memorial service with military Honor Guard was held on Palm Sunday, April 10, 2022 at Divine Savior Lutheran Church. In lieu of flowers donations can be made to Trustbridge Hospice Foundation, 5300 East Avenue, West Palm Beach, FL 33407 or the Alzheimer’s Research Foundation. The family extends their heartfelt thanks to Trustbridge Hospice of West Palm Beach for their care and compassion during Nicky’s final months.

Nicholas (Nicky) W. Babzien passed away peacefully and was called home to heaven on Sunday, March 27, 2022, at the age of 90. He was born on May 11, 1931 in Munich, Germany and emigrated from Germany to the United States in June 1952 and was... View Obituary & Service Information

The family of Nicholas (Nicky) W. Babzien created this Life Tributes page to make it easy to share your memories.

Nicholas (Nicky) W. Babzien passed away peacefully and was called...