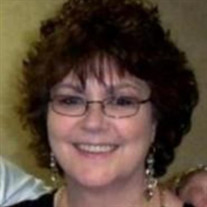 Nellie Bernice Ahle Chambers of West Palm Beach, Florida went to eternal rest with her Savior on Tuesday January 11, 2022 at her home after a lengthy illness. Nellie was born May 18, 1961 in Nelsonville, Ohio, daughter of Theadore Ahle and Jacqueline Doman Ahle of Amesville, Ohio. She grew up in Amesville in a large family, the 5th of 8 children in a bustling household of playfulness and nurturing. She gained an early love of attending the local Church and a love of learning and a lifelong love of reading. Nellie attended Amesville Elementary, then went on to graduate in 1979 from Federal Hocking HS in Stewart, Ohio. She was a bright and engaging student who had many friends and enjoyed participating in Flag Corps. Her studies concentrated on Office skills through vocational training. After High School she served in the United States Army at various locations around the world including Ft McClelland, AL, Ft Polk, La, Wiesbaden, W Germany and Okinawa, Japan. She achieved rank SP4 as an MP receiving medals/ribbons of Army Service Ribbon, Rifle M-16 (Marksman),.45 Caliber Pistol (Marksman). She gave birth to her daughter Etta Nicole Scott while serving in Germany in 1983. After her army service, she started her civilian career as a secretary/ legal assistant in a prominent law firm in Athens, Ohio. Then after moving to the Columbus, Ohio area, she attended Ohio Dominican College to earn a certificate in Paralegal Studies. Working as a paralegal, she truly found her passion serving in several law firms in Columbus, Albuquerque, NM and West Palm Beach, FL. While in Columbus, she mentored several up-and-coming new paralegals and was actively involved with the Paralegal Association of Central Ohio (PACO), eventually serving as President of PACO. She had the honor of receiving the eighth annual Hon. John W McCormac award in 2010 for her leadership in the paralegal profession. She reluctantly early retired in 2015 for health reasons. Her hobbies included reading, anything Kindle related (she always kept one within reach), puzzles especially sudoku, travel, especially on cruise ships and spending time with family when possible (especially the youngsters of the family). Nell was preceded in death by her parents, Theadore and Jacqueline Ahle, nephews Danny and Tyler Blackston, Stevie Ahle, Jr, a precious infant niece BreeAnna Blackston, in-laws Tom Woodhouse and Lisa Ahle. Nell is survived by all of her siblings Linda (Tom) Woodhouse, Donna Springer, Cindy (Al) Montle, Steven (Lisa) Ahle, Jennifer (Ervin) Blackston, Wanda (Ed) Pennington and Mary (David) Liberatore and many nieces, nephews, grandnieces and nephews. She also leaves behind her daughter Etta Nicole “Nikki” Scott and her loving husband of 21 years Tim Chambers. Cremation is at Palms West Funeral home in WPB Florida. Due to the current COVID circumstances and health concerns of some family members, a memorial celebration of her life is being planned at a later date in SE Ohio with interment of her remains in the family cemetery in Amesville, Ohio. Those wishing to honor her memory if they so desire may contribute to many charities that she held in high regard which include Big Brothers Big Sisters of America, The National Fibromyalgia Association, American Heart Association, The American Cancer Society and/or especially The Pancreatic Cancer Action Network (pancan.org).

Nellie Bernice Ahle Chambers of West Palm Beach, Florida went to eternal rest with her Savior on Tuesday January 11, 2022 at her home after a lengthy illness. Nellie was born May 18, 1961 in Nelsonville, Ohio, daughter of Theadore Ahle and Jacqueline... View Obituary & Service Information

The family of Nellie Bernice Chambers created this Life Tributes page to make it easy to share your memories.