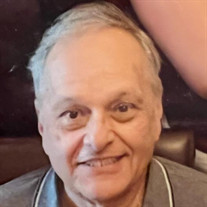 N. Thomas Sala born on September 18, 1950 in Havana, Cuba, passed away peacefully in his home with his wife by his side in Royal Palm Beach, FL after a courageous battle with ALS. Preceded in death by his daughter Rebecca Anne Sala and his parents, Narciso and Gladys Sala. Survived by his wife Janet Sala, 5 children - Christine Tomasello, Jennifer Sala, Katherine Costilo, Christopher Sala, and Elizabeth Sala, 2 grandchildren - Adele Tomasello and Asher Costilo. Tom and his family moved from Havana, Cuba to Philadelphia, PA when he was just 10 years old. He attended college at St. Joseph's University in Philadelphia, PA where he graduated with a degree in business and marketing. He met his wife, Janet, in 1972. They were married in 1975, and celebrated their 47th wedding anniversary in June 2021. He began his management experience in 1977 at Owens Corning Fiberglass in PA before being transferred to Ohio to independently manage his own center in 1981. Tom and his young family moved to Palm Beach Gardens, FL in 1987 where he began his sales career in telecommunications and cars. In 2009, Tom and his family moved to Harrisburg, PA, to assist in caring for Janet's elderly parents, until his retirement in 2018. In 2019, Janet and Tom returned to FL to be close to their children and grandchildren, who lovingly called him “Papa.” A classic car enthusiast and lover of American muscle cars since his youth, his favorite past time was racing his '69 GTO and '70 Dart at Morososo/PBIR. This is where Tom was highly revered and nicknamed “the Judge” after he won the Citrus Nationals. Tom also loved collecting and building classic model cars and trains, while sharing this hobby with his children. On weekends during football season, you could always find Tom and Janet sitting in their favorite recliners watching all their favorite football teams. The family will hold a viewing on March 30, 2022 from 5pm-7pm at Palms West Funeral Home at 110 Business Parkway in RPB, FL. There will be a ceremony of Catholic burial on March 31, 2022 at Our Lady Queen of the Apostles Catholic Church on 100 Crestwood Blvd. in RPB, FL at 11am and burial immediately following at Our Lady Queen of Peace Cemetery on 10941 Southern Blvd, RPB, FL. In lieu of flowers, the family requests donations be made to: Our Lady Queen of the Apostles Catholic Church or the Florida Chapter ALS Association.

N. Thomas Sala born on September 18, 1950 in Havana, Cuba, passed away peacefully in his home with his wife by his side in Royal Palm Beach, FL after a courageous battle with ALS. Preceded in death by his daughter Rebecca Anne Sala and his... View Obituary & Service Information

The family of N. Thomas Sala created this Life Tributes page to make it easy to share your memories.