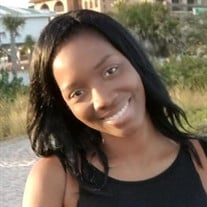 Myesha Abonie St. Paul-Davis was born August 4, 1980. After a courageous battle, Myesha passed away peacefully at home. Myesha, also affectionately known as “My My” by many family members and friends, was born in Brooklyn, New York to Karlene Angie Powell (Loxahatchee, Florida) and Charles St. Paul (Brooklyn, New York). She was christened by former U.S. Congressman, Reverend Dr. Floyd H. Flake at Greater Allen A. M. E. Cathedral, located in Jamaica, Queens, New York. She graduated from St. Marks Lutheran School, then went on to Kingsborough High School, (now known as Kingsborough Early College School), both schools located in Brooklyn, New York. After the family relocated to South Florida, Myesha attended and graduated from Coral Springs High School. Always wanting to further her education, Myesha matriculated from Florida Atlantic University (Boca Raton, Florida), earning a Bachelor of Science Degree. Myesha went on to earn a Master’s Degree in business from Nova Southeastern University (Davie, Florida). Myesha was employed by Comcast where she led the team that managed the Real Estate Portfolio for the Florida Region. On May 7, 2007 Myesha was joined in holy matrimony to U.S. Army Sergeant First Class, Cedric B. Davis Jr., whom she met while living in Leon County, Florida. From this beautiful union, God blessed them with two astute and precious children, Taylor and Blake Davis. Myesha had the remarkable ability to balance work, family-life and was a devoted mother. She started a Davis family tradition of taking an annual Christmas picture, with the four of them dressed in matching PJs. With handwritten envelopes, Myesha lovingly mailed a copy of the portrait to family members, showing how proud she was of her family. Myesha even gave in and allowed the kids to get a puppy, named Oreo. Taking a cue from her parents, Myesha was also an entrepreneur at heart. While still working, she created a successful event and wedding planning business. However, one of her most prized creations was “Sugar Mamma’s”, a cottage bakery business. Sugar Mamma’s produced many confections, which were sold at Green Markets throughout Palm Beach County, Florida. Being an accomplished baker, Myesha prided herself with selling out of everything she made well before the day was over. She even had a staff who also helped with production and sales. Later on, Angie, her mother, cotched on to the sales table and started helping by selling a ginger-pineapple drink that excellently complimented the many cookies and cakes that were sold. Forever the consummate host, Myesha held several family gatherings throughout the years. And to end the evening, Myesha would unveil her famous Rum Cake, accompanied by a sauce that she also painstakingly made from scratch. Myesha will forever be remembered by her devoted sister Ariel St. Paul (Brooklyn, NY) and brothers Charles St. Paul, Jr. (Prince George’s County, Maryland) and Marlan Edwards (Palm Beach County, Florida). Myesha touched the lives of many people with her smile and generosity, and maintained her trademark sense of humor. In addition to her husband, children, parents, and siblings, she is survived by her aunts and uncles: Grace Duncan (Virginia), Doreen A. Phoenix, (Florida), Claudette D. Powell (New York), Sandra “Sanie” A. Sutton (Florida); William Sutton (Florida), Owen Webb (Florida) and one who has been in her life for several years, “Uncle” Malvern Edwards. Additionally, Myesha is survived by several cousins who loved and adored her completely, along with countless other friends and family who were blessed to know her.

Myesha Abonie St. Paul-Davis was born August 4, 1980. After a courageous battle, Myesha passed away peacefully at home. Myesha, also affectionately known as &#8220;My My&#8221; by many family members and friends, was born in Brooklyn, New... View Obituary & Service Information

The family of Myesha St. Paul-Davis created this Life Tributes page to make it easy to share your memories.