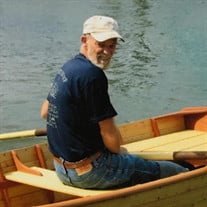 Mike was the son of Richard E. and Frances M. (Eppard) Kephart. Born in Bedford, Indiana. He grew up in Valley Station, Kentucky attending Valley High School. The Kephart family valued serving in the armed forces. Just short of his graduation in February 1969, Michael and his sister Judy enlisted in the United States Marine Corps. Mike served during the Vietnam War, stationed in Okinawa, the Philippines, Japan, and Quantico; his sister Judy served in Arlington, Va. Soon after they enlisted, his brother Steven joined the Army. Semper Fidelis typified Michael’s attention to every detail no matter the job, working as a master-carpenter and boat builder. Mike moved to Florida in 1989 the week Hurricane Andrew hit. He opened the Wooden Boat Shop in Lake Park, later moving to Okeechobee where he established Okeechobee Canoe and Paddle. He was a master-craftsman who could envision and create anything out of wood…he even made his own tooling! Mike was an accomplished musician and songwriter who sang in the style of James Taylor. He enjoyed all types of music to include Beethoven. Mike loved all animals as a child – opossums and frogs mostly, and as an adult he especially loved Skipper his Dachshund. Mike is survived by his sister Judith Anne Kephart of West Palm Beach, brother Stephen Mark Kephart of Memphis, Tennessee, two nieces, two nephews, many cousins, and friends everywhere. In lieu of flowers, memorial gifts should be sent to St. Jude’s Children’s Hospital, Peggy Adams Animal Rescue, or the DAV.

The family of Michael Allen Kephart created this Life Tributes page to make it easy to share your memories.

Mike was the son of Richard E. and Frances M. (Eppard) Kephart....