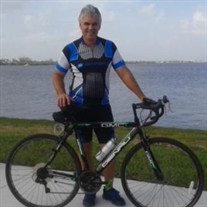 Mark David Barndollar, 56, passed away in Palms West Hospital on Tuesday, November 24, 2020, after a courageous battle with COVID‐19. He was born in Goldsboro, NC, the son of Carol Jarman and Michael John Barndollar. From Goldsboro, NC, Mark moved with his family to Detroit, MI, Charleston, SC, and then to south Florida. Mark graduated from Atlantic High School and attended Florida Atlantic University. He worked as a retail store manager for many years and was employed by Advance Auto Parts at the time of his death. Mark was a happy, caring person who had a deep love of his family and enjoyed spending time with his children and grandchildren. He enjoyed traveling and being in the outdoors. A few years ago he took up long‐distance bicycling, and he especially enjoyed long bicycle treks through the state with his fiancée, Beverly. Mark was preceded in death by his maternal grandparents, Tom and Frances Jarman, and his paternal grandparents, John and Elizabeth Barndollar. Mark is survived by his fiancée, Beverly Miah (Lake Worth, FL), his children Briana Barndollar (Greenacres, FL) and Ryan Barndollar (Boynton Beach, FL), his grandchildren, Kai and Callie Mead (Greenacres, FL), his mother Carol Jarman of Royal Palm Beach, FL, and his father Michael (Gail) Barndollar of Savannah, GA. Mark is also survived by his brother Kevin Barndollar (Royal Palm Beach, FL), by his sister Cristina Barndollar (Newnan, GA), and by Kurt Powell, a friend who was like a brother to Mark. Mark is also survived by Sabrina Raymer Barndollar, his former wife and mother of his children, and by his loving aunts, uncles, cousins, nephews and friends. With concern for the health and safety of our family and friends, a small memorial service will be held for the family only. Contributions are welcomed in Mark’s memory to St. Jude’s Children’s Research Hospital (www.stjude.org) or to the charity of your choice.

Mark David Barndollar, 56, passed away in Palms West Hospital on Tuesday, November 24, 2020, after a courageous battle with COVID&#8208;19. He was born in Goldsboro, NC, the son of Carol Jarman and Michael John Barndollar. From Goldsboro, NC,... View Obituary & Service Information

The family of Mark David Barndollar created this Life Tributes page to make it easy to share your memories.