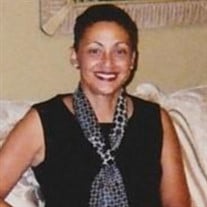 Marionetta Conner Harvey Willoughby, a loving mother, sister, wife, aunt and stepmother, was a blessing to her family and friends. She was born in Brooklyn, N.Y on March 10, 1950 to Irene and Robert Conner. She attended public schools in Brooklyn and graduated from Wingate High School. After graduation, she worked for the New York City Human Resources Administration. Marionetta, lovingly known as Mary, met and married Jeffrey Harvey and had one son Jeffrey Robert Harvey. After the death of her husband, she continued to work for the Human Resources Administration until she retired. Mary met Edmund C. Willoughby and they embarked on a warm and loving relationship filled with laughter. They married on March 10, 1995. They enjoyed traveling and were like two peas in a pod. They made their home in Florida, where Mary worked for The Landfill Group Construction company for nine years. Mary was an avid reader. Cooking was one of her passions. She loved trying new recipes and passing them on to friends and family. She had many hobbies that she loved including golf, bowling and scuba diving with her husband. In 2009, her son Jeffrey passed away due to asthma. Her beloved husband Edmund, lovingly known as Carl, predeceased her in December 2019. Mary leaves to cherish her loving memory her sister Cherie Johnson, brother in law Jeffery Spence, stepdaughter Wendy Carter and husband Anthony, stepson Carl Willoughby and nieces and nephews Jeanee Johnson and Jason Byrd, Andrea Johnson-Neal and husband Dwayne, Ariel Peterson, Henry P Johnson and wife Wandiza and Corey Peterson, as well as eleven great nieces and nephews and a host of other family and friends. Another angel in heaven to watch over us. Your life was a blessing, your memory a treasure. You are loved beyond words and missed beyond measure.

Marionetta Conner Harvey Willoughby, a loving mother, sister, wife, aunt and stepmother, was a blessing to her family and friends. She was born in Brooklyn, N.Y on March 10, 1950 to Irene and Robert Conner. She attended public schools in Brooklyn... View Obituary & Service Information

The family of Marionetta Willoughby created this Life Tributes page to make it easy to share your memories.