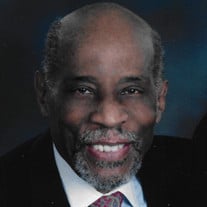 OBITUARY Marcus Jacques Garvey, Jr. Marcus J. Garvey, Jr., elder of the two sons of Marcus Mosiah Garvey, iconic Civil Rights Activist, and First National Hero of Jamaica, W.I., and Amy Jacques Garvey, passed away on Tuesday, December 8, 2020, in West Palm Beach, Florida. He was 90 years old, and had been ailing for some time. Marcus Garvey, Jr., was born in St. Andrews. Jamaica, and received his early education at Calabar High School in Kingston, Jamaica. His subsequent academic and professional training were at the University of London, England, the University of the West Indies, Mona Campus, Kingston, Jamaica and City College of the City University of New York (CUNY). He holds a Bachelor of Arts (English and Economics), and the Bachelor of Laws degrees of the University of London, the BSc. (Mathematics, Physics), and MSc . (Physics) degrees of the University of the West Indies. He migrated to the US in 1973 to pursue a PhD degree in Physics. He subsequently earned an MSc. (Electrical Engineering) from City College (CUNY). Mr. Garvey taught Mathematics and Physics at several high schools in Jamaica, at the university of the West Indies, and at City and Hunter Colleges (CUNY), in New York. Corporate professional employment included work as an Electrical Engineer in digital and analog circuit design, the analysis and design of optical fiber transmission systems and the analysis of navigational guidance systems. Upon retirement in 1993, he returned to academia and served as an Adjunct Professor in the Department of Mathematics at La Guardia Community College, NY, and also taught Aeronautical Engineering at the College of Aeronautics in Flushing , New York. On a part-time basis, Mr. Garvey also practiced engineering and consulted in his specialties as well as being an expert witness in many engineering court trials. He was a Registered Professional Engineer in the States of Massachusetts and New Jersey, a member of the Institute of Electrical and Electronic Engineers, the Optical Society of America, and the American Institute of Physics. He has also been published in the prestigious Scientific Journal NATURE. Prior to migrating to the USA, Marcus Garvey, Jr. was a member of the UNIA & ACL in Jamaica. In 1968, Garvey Jr., started his own political party, the African Nationalist Union because he felt the country needed it at the time. The political climate at that time was rife with divisiveness, disenchantment and corruption. The ruling elite considered him a threat, and did everything to prevent the rise of a credible third party in the country. At that time, because of his young children, he abandoned his political ambitions and decided to leave the country to pursue a doctoral degree in the U.S. Upon arrival in the U.S., and after school, his desire to continue his father’s work, led him to becoming a member of the UNIA division in Brooklyn, New York. After several years of involvement, he was elected President of the local A.L. Crawford Division. His participation at the national level eventually led to his election as the 7th President General and Administrator of the National Body at its 39th International Convention held in Washington D.C. in 1992. He served until 2004. Under his leadership, the organization made great strides in stability and structures were being implemented in an effort to return the organization to its glory days. Sadly, after starting to experiencing some health issues, Mr. Garvey resigned, and his efforts to continually upgrade the organization had to be turned over to his next in line of succession. On a more personal level, Mr. Garvey had a great sense of humor, and would often tell jokes about his school days. He was known by his nickname “100 before noon”. dubbed by his fellow classmates because he always scored 100 on his various exams taken in the mornings. He loved to dance and enjoyed traveling. He was also fun to be around and was passionate about basketball and watching his golfing fave Tiger Woods. Colin, his eldest son, often reminisced about his trips to the various mineral baths in Jamaica, where dad, the swim coach, taught him how to swim, and they spent much time engaging in physical fitness activities. Marcus was a physical fitness buff. One of Kyle’s fondest memories was attending his first New England Patriot’s game at Foxboro stadium with Dad. For Michelle, her greatest moment was being robed by her Stepdad upon receiving her Juris Doctorate degree. He loved his grandchildren. For the girls, whenever he was due to travel, they would send their “Flat Stanley” for trips with Grandpa. He would take Flat Stanley with him and upon return would send Flat Stanley back home. The girls would then have “Flat Stanley” for show and tell at school with stories of where he had traveled. For Carrington, it was the “ice cream fest” after dinner. Marcus, the chocolate maven and Carrington, the strawberry connoisseur, made for a perfect match. Mr. Garvey is survived by his wife Jean; his children Colin, Kyle Sekou, Step-daughter Michelle (husband Hugh Morris); his brother Dr. Julius Garvey and wife Connie; his grand children Merissa (husband Richard Harris), Amy, Jaime, and Carrington Morris. He also leaves to mourn his loss, two nieces, one nephew, several cousins and a host of friends, colleagues and organizational members worldwide. He will be deeply missed, but will be in our hearts forever. Hi there, You’re receiving this email because the family of Marcus Jaques Garvey Jr. has invited you to view the webcast of their loved one’s service. This webcast will take place on Monday, December 21, 2020 at 5:00 PM. Watch webcast for Marcus Jaques Garvey Jr.: http://www.palmswestfuneralhome.com/obituaries/permalink/9748019/LTWebcast The password for viewing this webcast has been set to: garvey768 If you have any questions, please contact Palms West Funeral Home at 561-753-6004. Sincerely, Palms West Funeral Home 561-753-6004 -- This email has been checked for viruses by AVG. https://www.avg.com

The family of Marcus Jacques Garvey Jr. created this Life Tributes page to make it easy to share your memories.