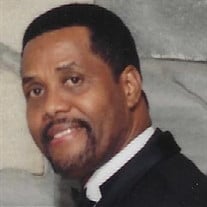 Marcell Joseph “Joe” McDonald sadly passed away November 01, 2021, at the age of 80 in West Palm Beach, Florida. He was born on October 16, 1941, in Jamaica, West Indies. He was one of fourteen children. He was married to his first wife, Olga, in Jamaica in his mid-twenties, and had a son, David, and a daughter, Marcia. He migrated to the United States in the late 1960’s and settled in New York City where he resided for most of his life. He worked for the New York City Transit Authority. He wed his second wife, Janet, on November 30, 1996, in New York City and remained married to her until his passing. “Joe” was a very spiritual, charismatic and vibrant man. Wherever he went, he exuded confidence and left a lasting impression on others. He could easily put a smile on someone’s face and make them feel special. He didn’t have to know you to make you feel like you were old friends. His shining light will glow eternally. His life and impact on others will forever be remembered. He is survived by his wife Janet, son David and granddaughter Jamila, daughter Michelle and granddaughters Melissa and Jessica, daughter Marcia and grandsons Sebastien and Dominick, and his many siblings, nieces and nephews. Services to celebrate and honor his life will be held at Palms West Funeral Home & Crematory on Saturday, November 13th at 1 pm.

The family of Marcell Joseph McDonald created this Life Tributes page to make it easy to share your memories.