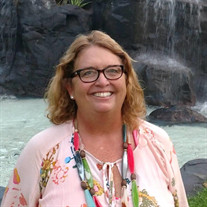 Obituary for Linda “Gigi” Hatfield Linda (MacLeod) Hatfield, who loved being called “Gigi” by her grandkids, departed her loving family on April 5, 2021. Linda was born in Winter Park, FL on January 13, 1959 to Emily and Donald MacLeod. She had 3 brothers (Donald Jr (Donnie), Robert (Bob), and Jeff). Linda attended Lyman High School where she met and married Harlen (Dell) Hatfield. She then graduated Magna Cum Laude from the University of Central Florida in 1981. She did all of this while having 3 sons by the age of 21. Linda and Dell were married for 45 wonderful years. Linda leaves behind her loving husband, Dell Hatfield, 2 sons Bryan (Natalia) and Kevin (Amber), 4 grandchildren (Rachel, Hunter, Raegan, and Easton). She was preceded in death by her son (Andrew) and 2 brothers (Robert and Jeff MacLeod). Linda and Dell spent their kid’s childhoods attending nightly baseball practices and games all while both working full-time jobs. Their devotion to family is evident in the lives of Bryan and Kevin as they raise their own children. Linda, better known as “Gigi” to her family, was an even better grandmother than mother. She cherished her trips to the Zoo, Lion Country, the beach, the fair, Disney, and Billie Swamp Safari. If there was a kid-friendly event happening in South Florida Gigi was there with those grandkids. She especially liked taking trips, cruises, and vacations with her husband, family and friends. Notably with her favorite relative of all, her nephew Ben Dunemann and his beautiful family (Deb and Bryce). It was during these times that Gigi lived life to its fullest and spent every day like it was her last. She will be sadly missed by all who she came in contact with and we will all cherish the memories that she gave us in her time on Earth.

The family of Linda Hatfield created this Life Tributes page to make it easy to share your memories.