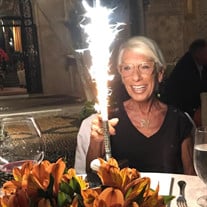 Age 72 of Deerfield Beach, FL passed away March 10, 2020. Linda Lee Halkowich 5/10/1947 - 3/10/2020 Linda was an artist; a gourmet cook; a gardener/ landscaper as well as a Fashionista. She was a golfer and into physical fitness, referred to bye some as ‘Madonna Arms.’ She caught a 57 pound sailfish her first time deep sea fishing. Wife to Jack; Mother to Oliver and Phoebe Mar, a ‘Big Sister’ to Nancy, Danny Debra & Mark and, of course, constant companion to Hidalgo & Wharton. Linda was Very Strong and Very Focused. For the past 21 years Linda was with United Airlines, most recently based in Houston but also did stints for United in San Francisco, New York, Charlotte, Austin and West Palm Beach. Having Graduated Alfred State College, southeast of Buffalo, she was a trained Medical Lab Technologist and worked at hospitals in NY & NJ early on. She was recruited by Coulter Electronics out of Miami as a Head Instructor for their Resort / Training Facility on Plantation Key, between Islamorada and Key Largo in 1973. She left Coulter to be an On-The-Go-Mom for Oliver in 1982 as well as Phoebe in 1986. She racked up over 500,000 miles on four Toyota Previa vans schlepping Oliver and Phoebe back and forth from Parkland to Miami City Ballet in South Beach daily as well as all over the Southeast to swimming, diving, gymnastics, piano, singing, steel drum lessons and dance events. In 1998 she took an apartment in San Francisco in order to be with Oliver, who was on scholarship at San Francisco Ballet school. It was then Linda accepted a position from United Airlines in 1999. In the last decade her Relationship with Jesus & Mary came first. Saint Anthony was always there to locate the missing. Saint Joseph, Casimir, Perigrine, Ambrose and Augustine were called upon often as well as ‘St Rush.’ Survived by husband, Jack Halkowich of Deerfield Beach, FL; son, Oliver Halkowich of Houston, TX; daughter, Phoebe Halkowich of Brooklyn, NY; brother, Mark Gualtieri of Boca Raton, FL; brother, Danny Gualtieri of East Hampton, NY; sister, Deborah Bullock of Clifton Park, NY; loving Chihuahua "Hidalgo". Linda is OK now and will not be forgotten If you plan on attending the service at South Florida National Cemetery, please arrive by 8:45 am and line up in lane 3.

The family of Linda Lee Halkowich created this Life Tributes page to make it easy to share your memories.