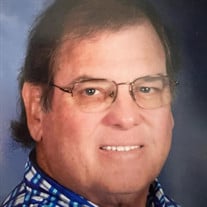 Kenneth Blake Dowling (70) passed away peacefully, surrounded by family on December 22, 2021. He was born on September 12, 1951 in Miami, FL and is preceded in death by his parents, Ralph and Joyce Dowling. He is survived by his wife Gisele, children Heather (Jim), Brooke (Quentin), Blake (Ashley), and Jessica (Dylan), and grandchildren Taylour, Preston, and the soon-to-be-born baby. He is also survived by his siblings David, Joy, and Wendy (Stephen), nieces and nephews Christina, Jessica (Chris), Amanda (Marshall), Andrew and 2 great-nephews, Mikael and Lyric. Growing up, he was incredibly athletic and excelled in practically every sport he attempted. He was an all-star catcher on the baseball team until an injury stood in the way of his future in the sport. He spent many a weekend on the water surfing and water-skiing with his family, and took that love of water with him into adult life. In his early adulthood he became a master at golf, and became the Assistant Pro at Turtle Creek Country Club. His siblings looked up to him and regarded him highly, and he gifted his mother with the first Irish Setter that launched her tenure into the dog-showing world. Ken resided in Palm Beach County where he worked for the school district for 24 years as a math and science teacher. He retired in 2018 and was known by his students for his sense of humor and his love of Diet Pepsi. During his teaching career, he helped organize the school’s yearbook and was in charge of the annual science fair. Towards the latter half of his teaching tenure he obtained his Master’s Degree from the University of Florida. He was also an active volunteer with the Academic Games Leagues of America where he helped coach, judge, and scorekeep on a local, state, and national level even after retirement. He volunteered with the South Florida Fair each year, helping visitors to find their way and directing them to where the best food was located. He loved being on the water, watching the Florida Gators play football, and serving others. He was a follower of Christ, and frequently served on Kairos Prison Ministry weekends. He attended Community of Hope with his wife. His celebration of life will be held on January 8, 2022, 4pm, at Community of Hope’s West Palm Beach Campus (2341 S Military Trail, West Palm Beach, FL 33415.)

Kenneth Blake Dowling (70) passed away peacefully, surrounded by family on December 22, 2021. He was born on September 12, 1951 in Miami, FL and is preceded in death by his parents, Ralph and Joyce Dowling. He is survived by his wife Gisele,... View Obituary & Service Information

The family of Kenneth Blake Dowling created this Life Tributes page to make it easy to share your memories.