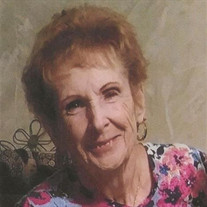 Judith “Judy” Yorganjian, 79, passed away Monday, August 19, 2019 at JFK Medical Center in Lake Worth, Florida. Judy was born August 18th, 1940 to Leona and John Reilly in Philadelphia, Pennsylvania, the oldest of two children. Judy grew up in Philadelphia and then met her late husband, John, in Baltimore. After they married on January 28th, 1961, they moved to West Palm Beach, Florida where they remained for the rest of their lives. During their 52 years of marriage, they raised 3 daughters and were given the joy of 4 grandchildren. During her life, Judy made many close friends. She really enjoyed entertaining, going to dinners and shows with her friends, spending time with her grandkids, shopping, and she loved her Phillies and Eagles. She is preceded in death by her parents, Leona and John Reilly; her husband, John Yorganjian; and her daughter, Debbie Yorganjian. She leaves behind her sister, Lynn (Mike) Strenger; daughters, Lynn (Tom) Lilly and Julie (Rob) Seguin; granddaughters, Jillian Lilly and Taylor Lilly; grandsons, Robbie Seguin and Johnny Seguin. A viewing will be held Friday, August 23, 2019 from 5:00 to 8:00 PM at Palms West Funeral Home. A Catholic Mass will be held at St. Luke Catholic Church at 11:00 AM on Saturday, August 24th, 2019.

The family of Judith Ann Yorganjian created this Life Tributes page to make it easy to share your memories.