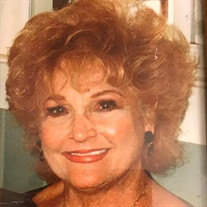 Josephine (Joan) Frasca, a longtime resident of Jupiter, passed away peacefully on Saturday, November 9, 2019. She was born March 21, 1934, in the Bronx, NY, and she insisted her mother made a mistake on the birth certificate. She married in 1955 to Charles Smoker and had two children, Steven Smoker (deceased) and Debbie Smoker Dragone. She divorced and married Jim Frasca, the love of her life in 1990. They moved from the Bronx to Indian Creek in Jupiter, where she worked in Publix on Indiantown Road, shopped thrift stores, dollar stores and any place where there was a good bargain. She also volunteered at the Jupiter Thrift store where she was like a kid in a candy store. Joanie was the life of the party. Whenever she showed up, you knew she was in the room. She was naturally funny, and always telling jokes and making people laugh. She loved to sing and was not shy about belting out a tune in the middle of Publix. The world was her stage. She dressed to the nines, always color coordinated and had matching earrings, necklace, and shoes. She insisted on always having false eyelashes, lipstick and her hair done just right. Her favorite saying was, “Make Up and Paint makes you what you Ain’t!” After several family tragedies, Joanie went to live with her daughter, Debbie, in West Palm Beach, where she began to decline in health. She didn’t want for anything, kept shopping on QVC and HSN, when she couldn’t get out of the house. She loved to listen to Legends Radio (100.3) for Vic Damone, Dean Martin, and Frank Sinatra. Joanie is in heaven with her husband, Jim Frasca, her son Steven Smoker, and her favorite son-in-law Ernie Dragone. She is survived by her daughter Debbie Dragone, her sister Norma Romano, her brother Vinny Capozzi, her nieces Cheri Jones and Michelle Capozzi, and several grandchildren. She had a very small family but had LOTS of love. Services will be held on Friday November 15, 2019 at 6pm – 8pm at Palms West Funeral Home.

Josephine (Joan) Frasca, a longtime resident of Jupiter, passed away peacefully on Saturday, November 9, 2019. She was born March 21, 1934, in the Bronx, NY, and she insisted her mother made a mistake on the birth certificate. She married in... View Obituary & Service Information

The family of Josephine Frasca created this Life Tributes page to make it easy to share your memories.