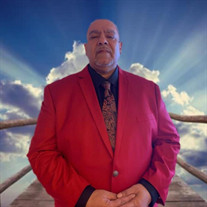 A gentle giant amongst men. A peacemaker in the midst of wars. A lover of music that could sway the masses and a heart with enough room to love everyone met. Joseph L. Sanchez was born August 1, 1963 in Passaic, New Jersey. The youngest of 6 siblings on his mother’s side, Joseph etched out his place by being known as a comedian. He was often compared to a skinnier version of Jerry Lewis. His hi-jinks and jokes would make him the center of attention well into his adulthood and provide stories that would be told year after year in commemoration of them. Joseph also enjoyed playing the drums in the local church. This love of music would move with him into adulthood and be a consistent theme in his interactions with the people who would impact his life. He lived primarily in Passaic where he was a prominent community father figure to the young people of places such as 4th,5th,6th Street and Aspen Place. His ability to deescalate situations and lighten the mood would make him a known peacemaker amongst the youth. He loved reaching out to them and making sure they were “good”. In 2015 he relocated to South Florida where he would eventually meet and fall in love with his life partner, Kim. With her, he would in turn have new experiences and learn to truly live and love life to its fullest. Joseph would continue pursuing his dreams in music and become a local promoter always on the lookout for talent and encouraging the artists signed. On August 19, 2021 Joseph was called home. He will always be remembered for his ability to make anyone who he met laugh; his ability to encourage those around him to pursue their talents and above all the love he had for his family and friends. Joseph is predeceased by his father Ruben older brother Julio Lopez; older sister Lydia Perez; grandson Justyn Brown. Joseph is survived by life partner, Kim Folston. Daughters: Jessica Alvarez, Tori Irby, Jeanette Cruz, Raquel Rosario, Melizsa Rosario, & Ya’Jarae Rodriguez. Son: Jonathan Sanchez. Mother; Maximina Sanchez. Granddaughters: I’Aani Irby, Jaiman Edwards, Jaylynn Sanchez, Eliza Smith, Ny’Ajah Levister, Mariah Hamm, ZaRae Holston, & Yari Lee. Grandsons: Jeremiah, Yasin Hamm, Jaedyn Brown, Jael Brown, and Ahlyis Lee. Brothers: Ernesto Lopez, Juan Perez, Jose Luis Camacho, & Ruben Camacho Sisters: Nancy Sanchez, Olga Camacho, & Sonia Camacho

A gentle giant amongst men. A peacemaker in the midst of wars. A lover of music that could sway the masses and a heart with enough room to love everyone met. Joseph L. Sanchez was born August 1, 1963 in Passaic, New Jersey. The youngest... View Obituary & Service Information

The family of Joseph Louis Sanchez created this Life Tributes page to make it easy to share your memories.

A gentle giant amongst men.

A peacemaker in the midst of wars....