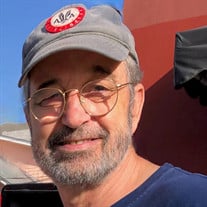 John (Jack) Joseph O'Brien II passed away on April 22, 2022 following a month-long illness in the VA Hospital. Born in Holyoke, MA on November 12, 1951, Jack was the son of the late Rev. Mr. John P. O'Brien and Claire Provost O'Brien. He graduated from Holyoke High School before enlisting in the U.S. Army. There, he joined the Intelligence Division after studying at the Army Intelligence School. Jack served a 12-month tour of duty in Vietnam, first with the II Field Force 219 MI Detachment at Plantation, Long Binh, then later with the J-2 Combined Intelligence Center in Saigon. After his tour in Vietnam was complete, he was transferred to XVIII Airborne Corps, Ft. Bragg, NC for his last two years in the Army. While at Ft. Bragg, Jack earned base-wide Soldier of the Quarter and, subsequently, Soldier of the Year. Upon completing his service with the Army in 1973, Jack returned to Massachusetts with his wife of the time, Donna Jecker O'Brien and his baby daughter, Bridget. Jack attended the University of Massachusetts at Amherst, where he earned a B.A. degree in History/Political Science. He simultaneously worked a variety of jobs to help support his family. One of those jobs led Jack to a long and highly successful career in the electronic alarm/security industry. Jack was a man who took his work and family responsibilities very seriously. Over his 40-year career, he worked for a variety of prestigious companies, including Wells Fargo Alarm Services, ADT Security, Rollins Protective Services, SecurityLink from AmeriTech, Siemens Security Services, Security Networks, where he was vice president, and Ackerman Security, where he was Chief Operating Officer. After leaving Ackerman in 2018, Jack continued consulting and was a founding member of the Global Life Safety Alliance. Jack was known for his empathetic fearlessness in confronting problems and handling crises. He was an outstanding leader and a man of integrity who cared deeply about the people who worked for him. One of his greatest satisfactions was mentoring and developing people in his organization. Jack was passionate about cooking and looked for any excuse to cook anything for anyone at any time. He was an avid reader and researcher on a wide variety of subjects, but especially history and science. He especially loved learning about the awesome mystery of the universe. He was also an aficionado of military history and biographies. Jack loved to travel, immersing himself in the diverse cultures of the world while visiting places as far-ranging as Cairo to Cape Town, Rio de Janeiro to Rome. Along the way, he met and fell in love with Heidi (Beitner) O’Brien who would become his best friend, wife, and soul-mate in raising two beautiful (twin) children. Above all, Jack loved his family. He was a devoted husband and father who adored his children and grandchildren. He was loving, empathetic, giving, and infinitely patient with those he loved. He was a devoted uncle who always celebrated special occasions and made everyone feel as if they were the center of the universe. He was a dedicated and loyal brother who always stood by his siblings (certainly no one messed with his baby sister). He was the best husband on earth. Jack's memory will be forever cherished by his adoring children, Bridget Criscuolo, Holly and John (Jackie) O'Brien, his grandchildren, Furia and Jarek Criscuolo, his brothers, Robert J. O'Brien, MD and Jake (Jimmy) O'Brien, his sister, Mary Rose O'Brien-Bernini, and all the members of the extended O'Brien clan. He will be dearly missed, most of all, by his adoring wife, Heidi, who, in Jack, found the love of her life. Gathering & Memorial Service will be held at Palms West Funeral Home on June 13, 2022 at 10:00AM, 110 Business Park Way, Royal Palm Beach, FL 33411 Interment will take place at South Florida National Cemetery at 1:00 p.m., 6501 S. State Road 7, Lake Worth, FL 33449 In lieu of flowers, donations may be made to the Gary Sinise Foundation: https://www.garysinisefoundation.org/

The family of John "Jack" O'Brien created this Life Tributes page to make it easy to share your memories.