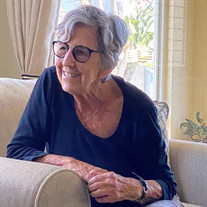 Johanne Hanifin Plourde died peacefully on Sunday, November 14, 2021 at age 84. Johanne, or “Nini” as she was affectionately called by her grandchildren, was born in Belchertown, Massachusetts. She lived in Vernon, Connecticut and moved to Jupiter, Florida in 1976. She spent the final years of her life in Wellington, Florida. Johanne was educated at Putnam Catholic Academy, college of New Rochelle, NY, and Bayside Medical Center, Springfield, Massachusetts where she earned her RN degree. She served as office manager at the Jupiter-Tequesta-Juno Beach Chamber of Commerce for many years. Johanne’s greatest accomplishment was her adoring family. She was a lover of hot black coffee, reading, crossword puzzles, and gardening. She always wore stripes and never passed up an opportunity to have dessert. While she would share anything else, she preferred to have her own sweets, especially ice cream and Reese’s Peanut Butter cups. Johanne will be remembered by her loving and much-loved family who will miss her dearly; daughters Suzanne Pollack and Carolyn Nieri, sons-in-law Sam Pollack and Ralph Nieri, grandchildren Shana Pollack Nogues, Robert (“Max”) Maxwell Pollack, Kathryn ("Kate") Nicole Nieri, Brent Christopher Nieri, and grandson-in-law, Andy Nogues. Nini was expecting her first great grandchild in February (Shana and Andy) and the addition of a granddaughter-in-law, Alyson Langley (Max) in March. She will also be missed by her sister Martha Dussault and large extended family. She was pre-deceased by her son, Robert Gary Plourde in 1979 and her brother, Peter Hanifin. At her request, no formal service will be held. Her creamains will be scattered at sea.

Johanne Hanifin Plourde died peacefully on Sunday, November 14, 2021 at age 84. Johanne, or &#8220;Nini&#8221; as she was affectionately called by her grandchildren, was born in Belchertown, Massachusetts. She lived in Vernon, Connecticut and... View Obituary & Service Information

The family of Johanne Hanifin Plourde created this Life Tributes page to make it easy to share your memories.