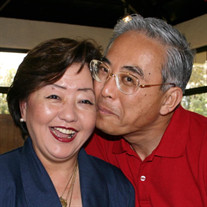 Dr. Jeanne Go of Boca Raton, Florida went home to be with our Lord and his Blessed Mother on October 12, 2021. Dr. Jeanne Go was born on February 19, 1949, in Iloilo City, Philippines to Fernando Go Sr. and Rosario Uy where she was raised with her nine siblings. She received her Medical Doctor degree at the University of Santo Tomas in the Philippines. Jeanne immigrated to the United States in 1976 to join her husband, Dr. Ka Hock Go and begin her residency in Pediatrics. After her residency in New York and Miami, Dr. Go became a practicing physician in 1983 at the Palm Beach County Health Department for thirteen years. Public health, including serving pediatric HIV patients, became a mission for Jeanne as she obtained her Master’s in Public Health from the University of Miami in 1992. Her dedication to those most in need continued when she opened her private practice in 1995 where she cared for some of the most high-risk, critically ill, and handicapped patients throughout South Florida. She also served as the Chair of the Department of Pediatrics at Bethesda Memorial Hospital in Boynton Beach, FL. She was a Blessed wife, mother, and grandmother. She married her true love, Dr. Ka Hock Go on June 22, 1975, in Manila, Philippines and they were married for over 45 years. They raised their loving family of three daughters and one son and were Blessed with eleven grandchildren and another one on the way. Jeanne was a true pillar of strength and beacon of faith to everyone who knew her. She evangelized the Catholic faith to everyone she met, in every action she did, and wherever she went. When she was not caring for patients, she could be found serving the Church or praying in front of the Blessed Sacrament. And when anyone was in need, whether a patient, a fellow parishioner, or a priest, she was always there to help. A little-known fact is Jeanne also loved to watch action movies. Dr. Jeanne Go is survived by her four children; her daughter and son-in-law, Jennifer and Dr. Andrew Berkman; her daughter and son-in-law, Jacqueline and Adam Farber, Esq.; her daughter and son-in-law, Jocelyn and Joe Pileggi; her son, Jonathan Go; and her eleven grandchildren, Seth, Gabriella, Lily, Mary, Eden, Joseph, Ella, Nathaniel, Sofie, Clare, and Noah. She is survived by her nine siblings; Raymundo, Jimmy, Dorothy, Robert, George, Stephen, Marie Beverly, Marie Grace, and Fernando Jr. She is preceded in death by her husband and her parents. In lieu of flowers, please send donations to Priests for Life at P.O. Box 236695, Cocoa Beach, FL 32923.

Dr. Jeanne Go of Boca Raton, Florida went home to be with our Lord and his Blessed Mother on October 12, 2021. Dr. Jeanne Go was born on February 19, 1949, in Iloilo City, Philippines to Fernando Go Sr. and Rosario Uy where she was raised with... View Obituary & Service Information

The family of Jeanne Uy Go created this Life Tributes page to make it easy to share your memories.

Dr. Jeanne Go of Boca Raton, Florida went home to be with our...