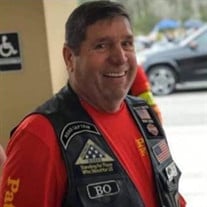 James “Bo” Wayne Biggs, Age 65 of West Palm Beach, FL passed away suddenly on August 23, 2021. Bo was born in Minneapolis, Minnesota September 12, 1955 to Carlos and Helen Biggs. Bo grew up in the Tampa Florida area where he attended high school up until he enlisted in the Army in 1972 and was a wheel vehicle mechanic. He deployed to Germany with the HHC 10th Engineer Battalion where he served as a mechanic. He was awarded the National Defense Service Medal and the Army Service Ribbon. Upon returning home he attended Tampa Technical College. In 1978 he married Susan D. Triplett who passed away in 1999. They had two children Amanda H. and James G.; Amanda recently passed July of 2021. Bo worked at ABC Roofing in Tampa and moved to West Palm Beach in 1987. While living in West Palm Beach he worked for Waste Management. He was a mechanic at GMC and recently retired working for the United States Post Office as a heavy diesel mechanic for 22 years. Bo was honored to “serve” with the Patriot Guard Riders as a rider and then as a Ride Captain. Bo volunteered to stand for our Heroes (Veteran’s and First Responders) on their final deployment, and delivered food and clothing for the homeless. He placed flags on Memorial Day and wreaths for Wreaths Across America at the South Florida National Cemetery. He helped to escort buses of WWII and Korean War Veterans for Honor Flights. Bo belonged to the local Palm Beach Harley-Davidson’s Owners Group where he was also a Road Captain. Bo was involved in charitable events and had great times with his extended family of riders he loved so dear. Bo was also involved in the USMC “Toys for Tots” to help local underprivileged children as Toy Box Coordinator dropping off boxes and then collecting toys. With Bo’s dedication to Toys for Tots and the learning curve that came with Covid last year, they thankfully had a successful year and were able to bring joy to many children. The toys were distributed by the local USMC for Christmas. He also belonged to American Legion Post #268 and #258. Bo enjoyed family and friends and was always willing to help anyone in need. He held great regard and honored those who fought for our country’s freedom. Bo is survived by his loving wife of 21 years Kathleen “Kathy”, son James (Stacie), Brothers William (Lillie), Robert (Claralee) and five grandchildren: Christopher, Andrew, Susan, Jacob, and Ethan along with many nieces and nephews. He was preceded in death by his parents, his wife Susan, his brother George, and most recently his daughter Amanda. An Honor Guard Memorial service will be held October 29th at Palm’s West Funeral Home 110 Business Park Way Royal Palm Beach, FL 33411. Visitation from 9:00 a.m. to 11 a.m. and Honor Guard Services beginning at 11:00 a.m. Please sign the guestbook on the funeral home website on Bo’s announcement. A celebration of life will be held at the American Legion Post 268 banquet hall 1690 Avenue H W Riviera Beach, FL 33404 at 11:00 a.m. October 30th. In Lieu of flowers the family asks donations be made to Stand Down House at standown.org.

The family of James Wayne Biggs created this Life Tributes page to make it easy to share your memories.