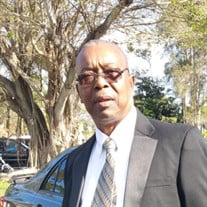 God in His wise province on December 8, 1949 in the rural district of Mahagony Hill, nestled in the parish of St Elizabeth with rainbow and sunshine illuminating the sky blessed Mavis Campbell and Austin Morris on that magnificent day with a bouncing baby boy to whom they gave name Herbert Sinclair Campbell otherwise known as Morris, Diden which was the first child for them both. Morris garnered his education at Orange Hill Elementary School. He would often times be seen running his iron wheel to school in order to get to school on time. As a youngster he enjoyed playing marbles and gig with his friends and siblings and in the midst of the engagement sharing a few jokes. From a very young age he sought to be an independent person that such at a tender age, after leaving school he sought to gain employment at the Delisser Farm, in Seven Rivers Cambridge in St. James where he carried out several job functions such as cane cutting and harvesting bananas. He was such an adventurous individual that after working on the farm for sometime he later went to live in Kingston with his Aunt Gwen. Being an astute gentlemen he aspired to gain other skills and worked as a security guard and also capturing individuals precious memories through photography at Victoria Park in Downtown Kingston. He continues to aspire to go higher and on Thursday, October 9, 1975 he migrated to Florida in the USA and later gained employment at The Okeelanta Corporation where he worked in various capacities until his retirement. Thereafter he worked at Walmart until his passing. He was so multitalented that he occupied jobs such as tire repair, welding, trailer driver, plumbing and retail sales. Morris loved people and especially his family. He adored and cherished his children and his siblings. One of his younger siblings Sonny, described him as a having an elephant memory as any information about the family history that’s needed, his siblings would go to him, to obtain such report. Entertaining family and friends was one of the many things that he enjoyed doing. On Boxing Day of every year everyone would be off to his residence for the usual Christmas party where he would cook and welcome everyone; the experience and knowledge he had from having operated his own restaurant previously. Once per year he would visit Jamaica to ensure the resting place of his loved ones was in excellent condition and families and friends would gather around and would be so happy to know that he was in town as he entertained them as well. He was so humble, loved to laugh, caring and would not permit anything to perplex his tranquility or to even disrupt his equilibrium. He always worked hard for his family. His first marriage produced a son, Herbert, Jr. his second marriage produced three daughters; Corane, Yolande and Courtney. In 2013, he married Peaches, who remained by his side until he was called home to glory on November 2, 2021. The Lord saw that he was tired and that his work on earth was completed and whispered my child come home. He leaves to mourn his wife: Peaches; Sons: Herbert Jr., and Tremonte; Daughters: Corane (Puncy), Yolande (Daliah), and Courtney; Step-children; Keith, Keisha, Staci-Jo and Klive Austin; Brothers: Sonny, Rocky, Manan, Kerry, Nigel, Radcliffe, Edmund, Richard and Alvin; Sisters: Denise, Susan and Gee. Twelve (12) grandchildren, four (4) great-grandchildren, aunts, uncles, nieces, nephews and a host of other relatives and friends. A writer once said “Life is but a stopping place, a pause in what's to be, a resting place along the road, to sweet eternity. We all have different journeys, different paths along the way, we all were meant to learn some things, but never meant to stay... our destination is a place, far greater than we know. For some the journey's quicker, for some the journey's slow. And when the journey finally ends, We'll claim a great reward, and find an everlasting peace, Together with the lord.” Death is final, it leaves a heartache no one can heal. Love leaves a memory no one can steal. The memories of him will forever be etched in our hearts as they are rehearsed by his loved ones. May his soul rest in peace and light, perpetual shine upon him.

God in His wise province on December 8, 1949 in the rural district of Mahagony Hill, nestled in the parish of St Elizabeth with rainbow and sunshine illuminating the sky blessed Mavis Campbell and Austin Morris on that magnificent day with a... View Obituary & Service Information

The family of Herbert S. Campbell created this Life Tributes page to make it easy to share your memories.