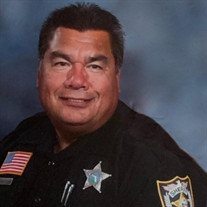 Gregorio Cabrera, Sr., 70 of Lantana, FL, passed away on May 31, 2021. Born in Snyder, TX, and raised in Robstown, TX, he was the son of Francisco and Jesusa (nee Garcia) Cabrera. Gregorio served proudly in the United States Army and fought for US in Vietnam. After the war, he decided to move to Florida in 1974 where he worked hard and went to school to get his education and met the love of his life, Linda P. (nee Gracia) Cabrera, and has been happily married ever since. In 1976 he started working with Palm Beach Sheriff’s Office as a deputy officer and retired after 33 years of service due to his health. For the last 25 years, Gregorio and Linda together have been members of Holy Spirit Catholic Church. Gregorio honored God as a 4th degree Knight of Colombus, a CCD Teacher and served as a “money counter”. At one point, Gregorio and Linda served as foster parents to children in need. Gregorio’s hobbies included, playing the guitar, traveling with his lovely wife, had a love for BBQ, was a member of the Big Dog Ranch and American Legion and being with his family and friends. Gregorio’s memory will be cherished by his wife Linda, children; Tony (Norma) Cabrera, George Michael (Martha) Cabrera, Irmalinda Wilson Cabrera, Gregorio Jr. (Suszette) Cabrera; grandchildren, Mel, Ninette, Cazlynn, Claudette, Gregorio III, Jon, Clovis Jr “CJ”, Zain; along with numerous loving family members and good friends. A visitation will be held on Monday, June 14, 2021 from 4-8 PM at Palms West Funeral Home with a prayer service beginning at 7 PM. A Mass of the Resurrection will be held 10:30 AM on Tuesday, June 14, 2021 at Holy Spirit Catholic Church. Following mass, Gregorio will be laid to rest, with Army Honors, at South Florida National Cemetery. In lieu of flowers, the family requests donations be made in Gregorio’s memory to Big Dog Ranch Rescue, https://www.bdrr.org/

Gregorio Cabrera, Sr., 70 of Lantana, FL, passed away on May 31, 2021. Born in Snyder, TX, and raised in Robstown, TX, he was the son of Francisco and Jesusa (nee Garcia) Cabrera. Gregorio served proudly in the United States Army and fought... View Obituary & Service Information

The family of Gregorio Cabrera Sr. created this Life Tributes page to make it easy to share your memories.