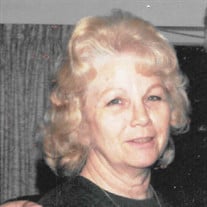 Gladys Viola Lucille Bennett (nee Eastridge) 86, of Loxahatchee, Florida died on December 21, 2020 from complications resulting from a fall while tending her beloved plants. She went by her middle name, Lucille, known affectionately by family and friends as “Ceil”. She is survived by her husband of 52 years, Donald T. Bennett Jr. (D.T.). Lucille was born February 22nd, 1934 in Washington County, Virginia, to the late Quincy Thomas and Blanchann Eastridge. Ceil was cherished and loved by all her family and friends. She loved nature, always growing a garden, and tending to her plants and flowers, feeding the birds from her home crafted bird feeders- cussing out the squirrels, but feeding them anyway. She also cared for fish and the softshell turtle in the back-yard pond. She was always eager to share seeds and plants with everyone. A true animal lover Ceil, and D. T. always had pets, mostly dogs, and fish tanks in the house. Lucille was a lady with a multitude of talent that she fearlessly pursued. The lack of job opportunities in the mountain region of Tennessee and Virginia in the late 40s and early 50s had her leaving for work east to Baltimore, MD, where she apprenticed as a waitress and mixologist, becoming very efficient in the trade. She helped her family back in the Hills by returning in the middle 50’s and gathering up some of her brothers and her daughter and moved them to South Florida where she continued her trade as a premier mixologist. In 1968, she met and married her surviving husband, D.T. Together they founded Geminitype, a typesetting company in Fort Lauderdale. A few years after the founding of the company, they bought the building and became landlords to the other businesses and an apartment, as well as acquiring an existing printing company, Blvd Press which Lucille oversaw and performed the hands-on running of the businesses. After selling both businesses, property, and their home in Pompano, Ceil and D.T. relocated to Bluff City, TN where they raised cattle and farmed tobacco, hay and corn as well as creating an awesome garden. Never able to be still, Lucille got involved in selling printing and advertising for printing companies and a weekly newspaper in Blountville, TN, the Sullivan County News. Because of her persistent and her never quit attitude Lucille caught the eye of Ted Jones the CEO of the international Hot Rod Association. She was hired as the Director of Advertising for IHRA Drag Review MAGAZINE in Bristol, TN. Attending all the national events around the county. When the IHRA sanctioning body sold, she retired and returned to South Florida. Before transitioning from Tennessee back to south Florida, Lucille got involved exhibiting in craft events. Showcasing her very talented ability of creating jewelry accessories, earrings, bracelets, necklaces, Indian war bonnets and all sorts of creative things. After She and Donald traveled the craft show circuit in TN. VA. NC. They returned to South Florida in 1994 where they built a home in the Acreage located in Loxahatchee, FL. Lucille spent her last years among her beloved surroundings of nature and fantastic neighbors with a happy heart. Many of her survivors will remember and cherish Ceil’s spaghetti dinners that nourished generations. Lucille is survived by her husband of 52 years Donald T Bennett, Jr, and her daughter Cathern Ann Taylor her husband John Talor. Survivors on the Taylor side include 3 Brothers Larry Eastridge Bullhead City AZ., William Eastridge Roan Mountain,Tn., Wade Eastridge Bluff City,Tn. With grandchildren Amie Odum and Matthew Taylor, 6 great grandchildren and 3 great greats. Embracing the modern blended family, Miss Lucille is also survived by her stepchildren Guy Bennett, Lynn Schewedes, Tommy and Donald Robert Bennett, and Robert Rogers along with 13 grandchildren, 19 great grandchildren and one great-great grandchild. She is also survived by nieces, nephews, great nieces and nephews and great-great nieces and nephews too numerous to name. Her love of family and friends ensure her legacy will last forever. Burial and Memorial will be Friday January 15th, 2021, 2:30 p.m. at VA National Cemetery, 6501 S. State Road 7, Lake Worth, FL 33449.

The family of Gladys Lucille Bennett created this Life Tributes page to make it easy to share your memories.