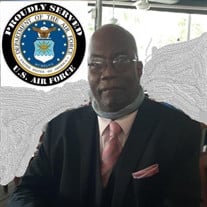 George Daniel Lewis, Jr., was born at Provident Hospital in Chicago, Illinois on March 4, 1951. He was the first son of George D. Lewis, Sr., and Annie Laurie Stephens Lewis. George was a sensitive child; known for his wit and concern to behave in ways to please his parents. He grew up and spent significant amounts of time with his paternal Cousins, Aunts, Uncles and Grandmother in Chicago. He also spent vacations with his maternal Grandparents, Aunts, Uncles and Cousins in Louisiana and California. Very active in religious programs at Chicago’s Progressive Baptist Church, George was engaged in choirs, scouting, ushering, Sunday School and youth groups. He was baptized at Progressive by the late Rev. T.E. Brown and remained an active member until he left home to serve in the U.S. Air Force. George attended and graduated from Kozminski Elementary School in 1964; 2 years after the U.S. Supreme Court ruled on Brown Vs. Board of Education, and as the community of Hyde Park was beginning to racially and ethnically integrate. As a result, George’s picture was featured, along with his father and brother in the Hyde Park Herald newspaper as they did yard work in front of their Drexel Avenue home. He also graduated from Hyde Park High School in 1968 and distinguished himself in the R.O.T.C. Program at the high school. After completing high school, George enrolled in the U.S. Air Force, with hopes of having a career in the military. Sadly, he sustained two traumatic brain injuries; one in Vietnam where he served as a Medic in the late 1960s and a second in a car accident on the Air Force base in Oklahoma in the early 1970s. The second injury resulted in George being in a coma for several months at the VA hospital. The effects of these TBIs were felt throughout the remainder of George’s life. He remained proud to be a veteran; wanting to have a career offering psychological services to veterans and active service members. While he had a brief career as a Stockbroker, he ended his work life as a Custodian with the Veteran’s Hospital in West Palm Beach, Florida, retiring at the age of 65. In his later life, George was a Wicca practitioner and recognized important rituals in the Wicca tradition. He loved to drive, socialize with friends, and show off his culinary skills by posting his meals on his Facebook page. On April 15, following a brief illness, George made his transition at his home in Pahokee, Florida. George is survived by his daughters Zhanna Zoey Lewis (Kyle Grow), Sondra Anne Lewis and Aisha Ebony Holmes; his sister Edith Lewis (Jon Swanson) and brother Ira Lewis. He also has one niece, two nephews and several grandchildren; along with wealth of maternal and paternal Cousins and one Aunt who survive him. George’s remains will be placed in the South Florida Veteran’s Cemetery in West Palm Beach, Florida. May he now rest in peace.

George Daniel Lewis, Jr., was born at Provident Hospital in Chicago, Illinois on March 4, 1951. He was the first son of George D. Lewis, Sr., and Annie Laurie Stephens Lewis. George was a sensitive child; known for his wit and concern to behave... View Obituary & Service Information

The family of Geroge Daniel Lewis Jr. created this Life Tributes page to make it easy to share your memories.