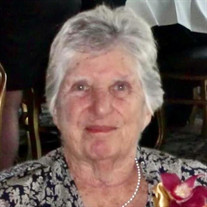 Geraldine Vogel Zajdel, 88, a native of Pittsburgh, Pa., passed away on September 3, 2020, from complications due to heart failure. She was born on January 16, 1932 to Joseph and Victoria (Horney) Vogel in the Beechview section of the city. She graduated from South Hills High School before marrying Walter Joseph Zajdel in 1952. They were married for over 63 years, until he died in 2015. Walter and Gerry lived in suburban Whitehall for nearly 40 years, before retiring to Lake Worth, Florida in 1990. While in Whitehall, they were members of Saint Gabriel of the Sorrowful Virgin Roman Catholic Church. Gerry lived her last five years at Cove's Edge Nursing Home in Damariscotta, Maine. She is survived by her son, Daniel, and daughter-in-law, Laura, of Boothbay, Maine; her daughter, Heidi Wilson, of Royal Palm Beach, Fl. and her former husband Mark, of Boynton Beach, Fl.; her daughter, Elizabeth Crampe, and son-in-law, Thomas, of Indian Land, S.C.; and James of Naples, Fl. and his former wife, Patti, of Shelby Twp., Mich. Also surviving are eight grandchildren and three great-grandchildren: Gwendolyn Zajdel Majewski, her husband Stefan and their son, Noel, Carson Zajdel, Captain Byron Zajdel (U.S. Army Reserves); Paige Wilson, Michael Wilson; Andrea Crampe Braswell and her husband Shawn, and their daughters, Ellie and Lucy; and Jared Zajdel and Hayley Zajdel. Gerry was predeceased by her older brother, Joseph, in 2015. She had a difficult childhood, as her father was killed in an automobile accident before she was born. After her children had grown, she worked for ten years in the ticket office of the Pittsburgh Symphony. Her family remembers Gerry as a caring, loving parent and grandparent who was devoted to rearing her four children. She was an accomplished seamstress, who made many of her daughters' dresses in their youth. Gerry and her mother often read to her children, and were a huge influence on their early education. Gerry's favorite poem, not surprisingly, was "The Reading Mother," by Strickland Gilliam. When living in Whitehall, she enjoyed traveling with her family to Florida during many summers to visit her mother and stepfather, Samuel Mazzari. Gerry was a selfless role model, who was Walter's primary caregiver for seven years after he suffered a series of strokes in 2008. Her family will miss her greatly, but is confident that she now dwells in the House of the Lord. She will be interred alongside Walter at the South Florida National Cemetery in Lake Worth. Attendence by request, please contact Heidi Wilson. In lieu of flowers, contributions in her name may be made online at http://www.pittsburghsymphony.org/give or mailed to the Pittsburgh Symphony Orchestra, 600 Penn Avenue, Suite 1, Pittsburgh, Pa. 15222. Online condolences may be extended at palmswestfuneralhome.com.

The family of Geraldine Helen Zajdel created this Life Tributes page to make it easy to share your memories.