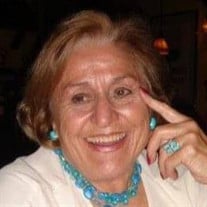 It is with great sorrow that we announce the passing of our beloved Mother and Granma, Georgina Randell. She was 85 years old and passed away peacefully on Saturday, April 24, 2021. Georgina was born on February 3, 1936 to John Henry and Beatrice Nellie Newton in Grimsby, England. She was the ninth of ten children and was extremely close to all her siblings throughout her life. She grew up in a home of successful commercial fishermen, as Grimsby was a major seaport at the time, and she would always say that there was nothing like fresh caught cold-water fish that her brothers caught after their trips away at sea. In her late teens Georgie (as she was more commonly known) met and fell in love with Warwick Randell and they married on March 5th, 1955. Their eldest son, Nicholas, was born a few years later, followed by their daughter Lisa Jayne, who sadly passed away at a very young age. Finally, their long-awaited youngest son, Guy Lewis came along. Georgie spent her early working years as a bookkeeper, as she was always known as a “Numbers Girl”. She worked for the Prudential in her early 20’s and there she fine tuned her math skills and, given a piece of paper and a pencil, could always figure out any math problem; forget the calculator she would say! Georgie and Warwick, along with their youngest son Guy, spent several years between the U.K and the United Arab Emirates, Dubai. Then, in 1985, they, along with the rest of their immediate family, decided to emigrate to Florida, where Georgie joined some of her siblings who were already living here. They purchased a Sod Company, Williams Soils & Sod in West Palm Beach and, with the help of family members, built it up into the successful business it is today. Sadly, Warwick passed away in 1992, leaving Georgina at the helm of the Company, where she remained for the rest of her life. Georgie was always keen to be involved in the community and she joined the Zonta Club of the Greater Palm Beaches and was involved in it for over 20 years. She held many positions on the board, ultimately holding the President’s position for 2 years. She travelled throughout the United States and to Paris with the Club and was instrumental in many of their fund-raising events for women’s causes and scholarships for girls. In her more recent years Georgie supported Burckle Place of the Lords Place in West Palm Beach, where she volunteered and made Christmas gift baskets every year for the ladies for numerous years. She would be thrilled to know that this is where any donations that are kindly made in her honor will be directed to. Georgie always had a passion for travel and loved cruises. She certainly managed to squeeze in many travelling adventures in her 85 years; travelling to; name but a few, Spain, Greece, Italy, France, Germany, Russia, Switzerland, Sri Lanka, Canary Islands, Canada and all the islands in the Caribbean. Along with her travels, her other favorite passion was socializing, she was a real social butterfly and loved nothing more than entertaining her friends and family with her culinary skills, which were many a time envied by all those lucky enough to enjoy her delicious meals, prepared with love and joy. Georgie would be the life and soul of any circle she happened to be in and she exemplified the word positive attitude. She could always spin a negative into a positive and, because of this wonderful attribute, her circle of friends was too numerous to count, and her family are overwhelmed with how many lives she touched with her warmth, love and joyful disposition. Georgina is survived by her sons, Nicholas Randell, wife Lynette; Guy Lewis Randell, wife Lori; grandchildren, Michael, Alyssa, Anthony, and Alexis, her sister Dorothy “Dolly” Yates of Grimsby, England, as well as many nieces, nephews, great nieces, and great nephews, who were all near and dear to her heart. The memorial service will be held at Palms West Funeral Home. Memorial donations in lieu of flowers may be made to Burckle Place of the Lords Place, P.O. Box 3265, West Palm Beach, FL 33402. Georgina, our Queen, leaves behind a great legacy and many family members and friends who will miss her dearly but will always carry her in their hearts.

It is with great sorrow that we announce the passing of our beloved Mother and Granma, Georgina Randell. She was 85 years old and passed away peacefully on Saturday, April 24, 2021. Georgina was born on February 3, 1936 to John Henry and... View Obituary & Service Information

The family of Georgina Randell created this Life Tributes page to make it easy to share your memories.

It is with great sorrow that we announce the passing of our beloved...