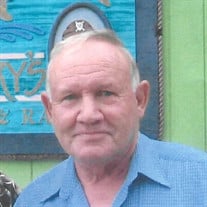 George “Bud” Windham, 78, of Loxahatchee, FL passed away on July 26, 2021 after battling complications of a stroke and lung cancer. Bud was a unique individual who lived life his way. He was an extremely hard worker, who commandeered respect and admiration from his coworkers and employees throughout his long career. Bud was a loving husband, father and grandfather, who dedicated his life to their success and happiness. He was an avid fisherman, fanatical sports fan, kindhearted animal lover and loyal friend. Bud loved going fishing with his kids; everglades, canals, lakes, rivers, ocean, intercostal, bridges and banks. Likewise, he took the family to football, baseball, basketball games, boxing matches and car races; Dolphins, Heat, Marlins and Hurricanes. He loved his dogs, cats, birds, fish, even goats and they loved him. Bud could make people laugh with his jokes, uncommon humor and distinct quotes. Bud truly loved life and enthusiastically having fun. Bud was born September 17, 1942 to George Windham and Vernice Kolwyck in St Stephen, South Carolina. At 12 years old, Bud’s family moved to Hialeah, FL, where he purchased his first bicycle and started delivering the Miami News. This was the beginning of an incredible career in the newspaper industry. Bud continued working his way thru high school with a 7 day a week route for the Miami Herald. He graduated from Miami Central High School in 1961. Bud joined the Coast Guard in 1962 where he spent 6 months of active duty and five and a half more years in the reserves. In 1964, Bud married Sandra Edwards, they had four children and were married for 56 years at the time of his passing. Bud came back to the Miami Herald in 1965 as a District Manager, worked his way up the ranks thru the years to become the Assistant Circulation Director in 1980. To further his career and set an example for his children, Bud attended Barry University in Miami Shores FL starting in 1983. He graduated in 1986 Magna Cum Laude with a Bachelor’s Degree in Business and Marketing. Bud and his family moved to Columbus, GA in 1988 where he assumed the top position of Circulation Director for the Columbus Ledger-Enquirer. After 25 years with the company Bud and his family moved to West Palm Beach FL, where he continued in the newspaper business with the Palm Beach Post. At the Post, Bud was Transportation Manager from 1993 to 1998 and Single Copy Sales Manager from 1998-2001. Bud finally retired in 2001, but continued with some consulting work for several newspapers. Bud unretired in 2002, landing a job with Suncoast Media Group, which published the Port Charlotte Sun. He held several positions from 2002-2007, finishing up as Single Copy Sales and Operations Manager. Bud finally retired for good in 2007. Throughout his long career Bud won countless awards, developed numerous innovations in the circulation and transportation of newspapers, presented at many conferences, mentored and guided many individuals in their careers. Bud is survived by his devoted wife of 56 years, Sandra, sons, Wade, Wesley, Wyatt, daughter Shelley, grandson Jaxson Money, sister Esther Carr and family, and cousin Becky Lewis.

George &#8220;Bud&#8221; Windham, 78, of Loxahatchee, FL passed away on July 26, 2021 after battling complications of a stroke and lung cancer. Bud was a unique individual who lived life his way. He was an extremely hard worker, who commandeered... View Obituary & Service Information

The family of George "Bud" Windham created this Life Tributes page to make it easy to share your memories.

George “Bud” Windham, 78, of Loxahatchee, FL passed away on July...