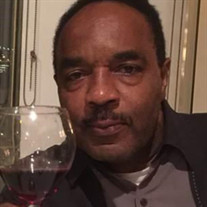 George Laurence Albert McRae passed away on March 12th, 2020 after a difficult fight with cancer. George was 65 years old. George McRae was born on June 22nd, 1954 in London, England, to Isabel Monica McRae and George L. Fitzalbert McRae. Both of whom have preceded George in death. At the age of 13, George and his family moved to the United States, settling in Queens N.Y. As a youth George was very athletic excelling in sports like boxing and soccer. George also had a passion for aeronautics and a natural ability to repair practically anything. His mom is remembered telling a story of George taking apart a radio in the home and when asked why, his response was “because I wanted to know how it works.” George attended and graduated from Springfield Gardens High School and received his college degree at Queensborough Community College. George’s passion for aeronautics led in the direction of working with one of the major airlines. Eventually, George made the decision to take a position with UPS. After several promotions and a dedicated career that lasted a little over 30 years, George retired from UPS as a District Manager at the age of 55. While in New York, George reconnected with a girlfriend that he had met over 20 years prior, Valerie Curinton. They re-established their relationship and the two were married on September 4th, 2008. After his retirement, George purchased a home and relocated to Wellington, Fl. Wellington was always the dream destination to live out his retirement. The location was ideal; sunny, near the beach and close to his mom. George was a devoted and loving son, spending enjoyable years caring and attending to his mom. Every night at the strike of 8 pm, George would contact his mother with suggestions of a television show or movie that would be her entertainment for the night. Also, during his retirement years George traveled, worked on the Obama reelection campaign, obtained his home inspection license and of course, repaired anything that came his way. George was intelligent and reserved…funny and serious…fearless and strong. George was always there to lend a helping hand. There wasn’t a car, appliance, toy, or gadget that George could not repair. George gave effortlessly of his time if you had a need. George’s family and friends will always remember his kind, compassionate and giving soul. George left this earth far too soon. There are things that he left unrepaired…for our hearts are broken. George will be greatly missed and will be thought of with love and many fond memories…. until we meet again… George is survived by his wife Valerie McRae, his sister Beverley McReynolds, his niece Dahra Miller, his two grandnephews Jalen and Jaxon, two goddaughters and countless family and friends. We are so sad for our loss but grateful for the time that George shared his love, humor and passion for life with each of us.

The family of George L. Mc Rae created this Life Tributes page to make it easy to share your memories.