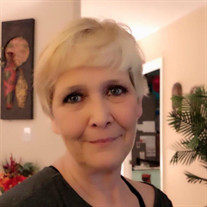 Gail Ann (Hill) Zipfel was born in Oxnard, California, on September 29, 1959, and passed away on December 14th, 2021, in West Palm Beach, FL. The daughter of Everett L. Hill and Cecile V. Nolette, she spent her formative years living all over the United States and in Germany. A small, blonde child with bright blue eyes, Gail was adored by both her mother and father as well as her older siblings. When Gail was 10, her mother passed away. Her older sister Beryl took over many of the duties of raising her, including loving her as her own and being a part of her support system throughout her life. Gail was a wonderful and attentive mother, adored wife, a dear sister, aunt, friend, and cherished Nonni. She was a storyteller who had the ability to talk to anyone and make a connection. She loved going to the movies with her grandson, reading, cooking, playing games, and knitting blankets for friends, family, and dogs. Her love of animals was well known; as a result, she was a frequent pet sitter for anyone that asked and had also spent time as a pet shop manager while living in Louisville, KY. She had an incredible, contagious laugh, a smile that lit up every room, and a kind heart that was immediately apparent to anyone who encountered her. Still, she found the most happiness just by spending time with her family. Gail was preceded in death by her mother and father Everett L. Hill and Cecile V. Nolette, and her brother Kenny. Her cherished husband and soulmate, Gary Zipfel, Sr. also died a mere 37 days before her. She is mourned and survived by her three children Gary Zipfel (Rainey), Jessica DeSutter (Todd), Dane Zipfel (Heather), and her best buddy and favorite person in the world, her grandson Taylor DeSutter. She is also survived by her beloved brother and sister, Beryl Hill and Everett Hill, many nieces and nephews, including Brittany, Brandon, and Breck, whom she treated and loved like her own children. The funeral will be held at Palms West Funeral Home on Saturday, December 18th, from 12-2 p.m with a small gathering after. Please keep the family in your hearts and prayers as they navigate this most difficult process of losing their mother so soon after the death of their father.

Gail Ann (Hill) Zipfel was born in Oxnard, California, on September 29, 1959, and passed away on December 14th, 2021, in West Palm Beach, FL. The daughter of Everett L. Hill and Cecile V. Nolette, she spent her formative years living all over... View Obituary & Service Information

The family of Gail Ann Zipfel created this Life Tributes page to make it easy to share your memories.