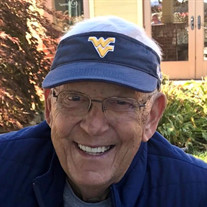 Dr. Frederick “Fred” Lee Colvard passed away February 9, 2021 at his home in West Palm Beach surrounded by his family after a valiant fight against cancer. He is survived by his soulmate & wife of 19 years, Diane Chaplin; devoted children Rick, Tim (Mary Beth), Kaylee & Kellee (Sean) Anderson; loving grandchildren Will (Briellen), Christopher, Clayton, Macsen & Brayden; adoring great-grandchildren Cayden, Ben & Ty; and loyal yorkies T-Bo, Lucky & Lady. Fred was born July 18, 1942 in Charleston, WV, son to Jess & Marika Glycadis Colvard. Growing up in Logan, Fred was an all-around athlete playing football, basketball, baseball and wrestling. It was on the football field where the speedster earned the nickname “Colt 45” and many accolades. He played multiple positions, but it was as quarterback he won the 1959 Kennedy Award as the top high school football player in West Virginia. The Colt 45 is still the only player to ever win this prestigious award for Logan High School, which earned him a spot on the Logan High School Hall of Fame. The Colt 45 took his talents to West Virginia University, where he played for 2 years and still holds spots in the top performance record books. He then transferred to Florida State University for one year before taking his talents to the professional level. His career in the Canadian Football League with the Ottawa Rough Riders was cut short after breaking his back, but this didn’t stop him. The Colt 45 then transferred to the Continental League and played for the Charleston Rockets. While he was an outstanding athlete, Fred made an even greater impact off the football field. He had a passion to help others. He earned his Bachelors degree from Morris Harvey University, Masters from Xavier University and his Doctorate from the University of South Dakota. He spent 40+ years working in educational systems in West Virginia, Ohio, Wisconsin and Florida. Whether he was a teacher, coach, mentor, principal, administrator or professor, Fred was known for driving results and improving community relations. Fred could always be found walking the halls of the school with a cup of coffee in hand wearing a ‘Save the Children’ tie. It was in his last position as the principal of Marathon High School in the Florida Keys were he met the love of his life, local real estate broker Diane Chaplin, and they settled into retirement. Together they traveled the world making memories. Fred loved God, his family, college football (especially the West Virginia Mountaineers & the Florida Gators), the Miami Heat and anything or anyone from West Virginia. He will be remembered for his infectious smile, willingness to lend a helping hand to anyone in need, bad ‘dad jokes’ and showing his family the true definition of love and happiness. A celebration of life will be held at a later date. In lieu of flowers, memorial donations may be made to Logan High School Athletics, 1 Wildcat Way, Logan, WV, 25601 memo: Fred “Colt 45” Colvard Memorial Fund or Trustbridge Hospice of West Palm Beach.

Dr. Frederick &#8220;Fred&#8221; Lee Colvard passed away February 9, 2021 at his home in West Palm Beach surrounded by his family after a valiant fight against cancer. He is survived by his soulmate & wife of 19 years, Diane Chaplin; devoted... View Obituary & Service Information

The family of Frederick Lee Colvard created this Life Tributes page to make it easy to share your memories.