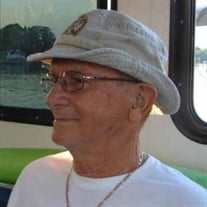 In Celebration and Beloved Memory of the Life of Frank Joseph Skorupa. Frank (Frankie) set sail with our Heavenly Father on December 29,2020. A self-taught, mechanically, and artistically gifted man, Frank spent much of his life finding ways to help others each day with both his skills and his generous contributions. He was a loving, compassionate giver, especially to those he saw were in need. Born October 31,1927 in Buffalo, New York, Frank was raised as an orphan after the age of two, in Hamburg, N.Y. He enlisted in the U.S. Coast Guard in and became a Boatswain, Second Class, upon honorable discharge. In his two tours in the Coast Guard, Frank served during World War II, and the Korean War, His duties included patrolling waters in Puerto Rico, Guantanamo Bay, Cuba, and the Caribbean Southern islands. He was stationed in Marblehead, Ohio in rescues and recovery in the Great Lakes and Canada. Frank spent numerous brutal winters monitoring the Marblehead Lighthouse, and servicing the lighthouse lens and station. He knew the history and exacting how many steps there were. He served with our beloved, Harry Fewelling and created a bond that was precious throughout both of their lives in Port Clinton. Frank married Mary Jean (Lamb)Skorupa in 1947, St. John’s Lutheran Church, Port Clinton, Ohio. He worked for over 40 years as a Carpenter, becoming a Master Carpenter, and continued his membership with the Ohio Carpenters’ Local 744. He also teamed with his wife, Mary Jean, at her M.J. Bicycle and Moped Shop from the 1960s to 2001. Together, they were proud of their custom designed bicycles for those with Special Needs. Frank also volunteered at St. John’s Lutheran Church as a Boy Scouts of America Commissioner, and was a BSA Scoutmaster, and Sea Scout Leader. While in Florida, he continued scouting as a Boy Scouts of America, Gulf Stream Council Volunteer, as a Merit Badge Counselor in Rowing, Sailing. He was part of the T.W. District Eagle Board of Review. He designed and built with his daughter the Buddy Board, Aquatic Outboard, and Paddle rack at Tanah Keeta Scout Reservation. Following the death of his wife in 2001, Frank suffered health issues, his daughter reintroduced him to the Northern Everglades where Frank experienced a rebirth of his love for nature. His improved health as he hiked daily, led him to become a Florida Master Naturalist. Frank volunteered for 15 years in environmental education in the Northern Everglades. At the City of West Palm Beach's Grassy Waters Preserve, he earned numerous "Volunteer of the Year" awards for in interpretive guiding, canoeing, swamp tromps, hikes, and bicycle tours. Frank's creative energy, dedication and time were a daily part of his contributions to all who worked with him and were in his care. His prolific nature photography won several awards and videography was used for promotion of environment programs of many art-in-nature projects and events like Klein Dance Company's, a multi-year 'Artist in Residency' granted by the Palm Beach Cultural Council. Frank worked with his daughter to create environmental educational programs for Everglades Day at the U.S. Fish and Wildlife Service's Arthur R. Marshall Loxahatchee Refuge. He enjoyed making and teaching people how to make personalized hiking staffs. He was active with high school to graduate students on internships with Orchid/Bromeliad Relocations and Tree Islands Research projects. During the 60’s, Frank began a hobby in finding treasures with metal detecting and diving. He loved combing the beaches of Lake Erie and rivers. As a member of the GPAA (Gold Prospectors Association of America) Frank traveled to North Carolina, Georgia, and Arizona. It was never about the gold, only the adventure spent in the outdoors with his children and friends. After 5 years of typing with two fingers, he published a book,” Orphan Frankie. My True Life” (Amazon Books). His writing details the cruel struggles of orphanage after the depression. He was a proud American who served our country and love for the Coast Guard, which he includes in his book. He found spiritual support with the priests, church, and homebound staff from the Our Lady Queen of Apostles in Royal Palm Beach, FL. Frank was predeceased by his wife, Mary Jean Skorupa, his mother, father, sisters, Ann Allen, Mary Uzelco, brother, John Skorupa, and brother, Stanley Skorupa. He is survived in loving memory by his daughter, Valerie Wilson, sons, Kevin Skorupa, Chester Skorupa; his grandchildren: Aaron Wilson, Ben Chapman, Abbie Masserant, Chelsea Mohr; great grandchildren, Katelyn Wilson, Trenten Wilson, Ava Wilson, Marlee Masserant, Lily Rose Mohr, Hazel Chapman, and Raylee Chapman. A Celebration of Life Memorial Photography Canoe and Hike will be scheduled in 2021. A family honor service will be done later in Port Clinton, Ohio in 2021, pending COVID conditions. (Dad said only during perch season) The family requests in lieu of flowers, donations may be sent to: Strength for the Journey DR, an organization that contributes to children in need, c/o PO Box 51, Port Clinton, Ohio, 43452; Palm Beach Purrs, 10978 150TH CT N, Jupiter, FL. (Kitten and Cat Rescue). Each have Amazon Wish Lists.

In Celebration and Beloved Memory of the Life of Frank Joseph Skorupa. Frank (Frankie) set sail with our Heavenly Father on December 29,2020. A self-taught, mechanically, and artistically gifted man, Frank spent much of his life finding ways... View Obituary & Service Information

The family of Frank J Skorupa created this Life Tributes page to make it easy to share your memories.

In Celebration and Beloved Memory of the Life of Frank Joseph...