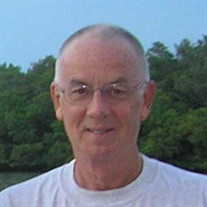 Frank “Andy” Andrew Ladda, 75, died November 9, 2021 peacefully at his home in Royal Palm Beach, FL after a 3-year battle with cancer. Andy was born on November 27th, 1945 in Canton, Illinois to Frank and Helen (Jarnagin) Ladda. He moved to south Florida in 1970 and started what would be a 40-year career at Rinker Materials in Miami(later CSR then Cemex) where he served in several different positions including Mixer Driver, Dispatcher, Operations Manager, Plant Manager and Accounting Manager in the Central office in West Palm Beach. While working at Rinker he met Beverley in 1972 and they married in 1975. Andy and Beverley moved to Royal Palm Beach in 1983 and have lived in the same home ever since where they raised their children and are active members of the community. Andy loved traveling with his family across the state to his favorite places: Walt Disney World, Daytona Beach and Bonita Springs. They took several trips to visit family in Illinois and Pennsylvania with all five of their children. Andy’s favorite thing to do was spending time with his 6 grandchildren. Everyone who knew him, agreed he was the most patient, gentle and kind human being who was happy to just “be”. Andy is survived by his wife Beverley and his five children, Michael, Cassie, Cindy, Donna & Linda; his six grandchildren, Jacob, Riley, Casey, PJ, Marin & Sam, his nephew James R Menne and his brother-in-law James A Menne. A memorial service will be held in his honor at Community of Hope United Methodist Church. 14055 Okeechobee Blvd, Loxahatchee, Florida on Wednesday, December 1st at 1:00 pm. In lieu of flowers, the family requests donations to be made to the Leukemia Lymphoma Society.

The family of Frank Andrew Ladda created this Life Tributes page to make it easy to share your memories.