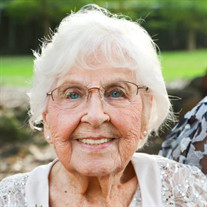 Frances Mary Tlustachowski was born February 14, 1924 in Johnstown, a small town in upstate New York, to Sophie Schulz and Andrew Tlustachowski. Fran always joked about the fact that everyone celebrated her birthday - Valentine’s Day. She had two siblings, Edward, who passed away in 2019, and Victoria, who is currently in a nursing home in Colorado. Fran lived most of her early life in Johnstown, and, despite being president of her class and a short stop (yes, a short stop!) on the softball team, moved to New York City in the middle of her senior year. She loved living in the city and often spoke about seeing performers like Frank Sinatra and Dean Martin before they were famous, and having fun at dances with serviceman when they were on leave. On October 13, 1945 her life changed when she met Stanley Mruczkowski at a family gathering. The Tlustachowski’s and Mruczkowski’s came to America together from Poland and remained friends even though one family settled in New York and the other in Ohio. It was love at first sight and they were married on January 18, 1947 and celebrated 49 years of marriage before Stan died in 1996. They were blessed with four children - Thomas in 1948, Stanley in 1950, Teresa in 1951 and Patricia in 1955 and eleven grandchildren and great-grandchildren. Fran and Stan were very involved in the Knights of Columbus and the ladies’ counterpart, the Isabella Guild. They developed many long time friendships through the organizations and the Catholic Church they served. Their Catholic faith was very important to them. Fran was a Eucharist Minister, sang in the church choir with Stan, was Treasurer for the Church Council and took communion to an Assisted Living facility every Sunday for 18 years. During the last two months, she would constantly ask her daughters and granddaughters to pray with her, which they happily did. Fran was “a pistol” – if you knew her, you know she was always “dressed to the nines” matching from head to toe. She loved life – dancing, singing, playing the piano/organ, golfing, playing tennis, traveling (especially her annual birthday cruise and her trip to Rome to see the Vatican) and entertaining. She loved crossword puzzles, jumbles, and Cryptoquips but second only to Stan – she loved to knit. She knitted afghans, sweaters, hats, scarves, baby blankets and, in her later years, hundreds of dishcloths. Fran was a bright light and a blessing in the life of every one she met. We were blessed to have her for 97 years. She will be dearly missed.

In lieu of flowers, the family requests that donations be made to Trustbridge Hospice.