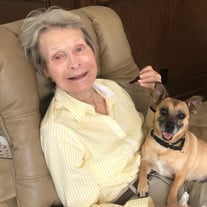 Eve Lloyd Thompson, 86 years old, died October 13, 2020 at home in Wellington Florida after a long battle with dementia and Alzheimer’s. Eve was born August 31, 1934 in Teaneck Township, New Jersey. She is survived by her dog Poppy, her nieces Katy Champ, Kristina Lloyd and Heather Lloyd, her grandchildren Jenifer Wicks and Nathan Wicks and many great nieces/nephews and great grandchildren. Eve’s husband Richard K. Thompson, Jr. of more than 40 years and her brother Frank Van Duyne Lloyd predeceased her. Eve was a graduate of Cornell University with a Zoology major intending to attend veterinary school but at the time women were not accepted. After graduation like her mother, Evelyn Roth Lloyd, Eve did some modeling and worked in the garment industry in sales and as a buyer of Women’s Sportswear in New York City and Washington, DC. Eve’s love of horseback riding and animals led her to varied and interesting life. Eve competed in competitive trail riding, saddle seat, hunter/jumpers and dressage. She also owned race horses, bred horses and fox hunted. Eve served in numerous leadership roles: Executive Director of the Washington International Horse Show, Color Commentator of Horse Sports for HTS-FOX in Washington, President of Maryland Horse Shows Association, Secretary of the American Horse Shows Association, Chairman of the AHSA Hearing and Planning Committees, and a Member of the American Horse Council’s Animal Welfare Task Force. In 1996 she was a member of the FEI Judicial Committee at the Centennial Olympic Games in Atlanta. At the request of a friend Bernice Barbour, Eve and her brother Frank established the Bernice Barbour Foundation in 1986. Frank was President until his death in 2007 and Eve served as Executive Director until 2015. The Bernice Barbour Foundation has contributed to significant improvements in animal welfare across the country. It is also the first organization that declined funding any organizations that did not spay/neuter all animals prior to adoption. Eve’s leadership with the Bernice Barbour Foundation caught the attention of several veterinary schools. In 1998 University of California, Davis School of Veterinary Medicine established its External Advisory Council made up of interested clients and friends of the School. Eve was the first person identified and recruited to this Council. She chaired the council from 1998 to 2018 and became the first Dean’s Leadership Council Emeriti. In 2005 she received the UC Davis School of Veterinary Medicine Service Award. Eve also served on veterinary boards at University of Pennsylvania, Tufts University, and Johns Hopkins Center for Alternative to Animal Testing. She was one of the founders of Animal Grantmakers. In lieu of flowers, memorial donations may be made to the UC Davis Foundation and sent to UC Davis, School of Veterinary Medicine, Office of the Dean – Advancement, P.O. Box 1167, Davis, CA 95617-1167. On line memorials can be given to the Dean's Priority Fund (Fund V0D1203) in memory of Eve. https://give.ucdavis.edu/VETM/V0D1203

Eve Lloyd Thompson, 86 years old, died October 13, 2020 at home in Wellington Florida after a long battle with dementia and Alzheimer&#8217;s. Eve was born August 31, 1934 in Teaneck Township, New Jersey. She is survived by her dog Poppy,... View Obituary & Service Information

The family of Eve L. Thompson created this Life Tributes page to make it easy to share your memories.