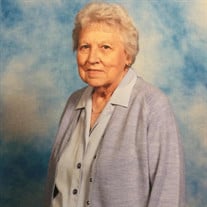 Ellen Gose Miller passed away on July 4 2021 at the age of 94. Ellen was born and grew up in Castlewood, VA, graduating from Temple Hill High School. She attended Johnson City Business College where she obtained a degree in office administration and worked in Washington DC at the Veteran’s Administration. While in DC she met her future husband , Crockford “Chuck” Miller, a young WWII veteran. After her husband’s degree studies at Virginia Tech and a short employment in West Virginia, they settled in Meadville, PA where they raised their four children. They moved to West Palm Beach in 1978. Ellen was a strong Christian and an active member at Calvary United Methodist, Lake Worth and more recently at Lakeside United Methodist Church, Lake Worth. She made friends easily and truly enjoyed her friends. She was a true southern girl, being proud of and interested in her heritage and history. After moving to Florida she pursued her desire to travel and learn about other countries and cultures. During the last four decades her travels included Alaska, Hawaii, Switzerland, Germany, England, France, Spain, Portugal, Ireland, Scotland, Egypt, Israel, Turkey and Russia. She most enjoyed spending time with family and friends and had numerous lifelong friendships that lasted more than 80 years. She was a loyal attendee at her high school reunions. Ellen had four children, seven grandchildren and six great grandchildren. She is survived by Chuck and Janie Miller of Cleveland Heights, OH, Brenda Dickenson of West Palm Beach and her three sons, Nicholas, Jason and Benjamin, Tony and Signe Miller of West Palm Beach and their two daughters, Jennifer and Melissa and, Steve and Denise Miller of Charlestown, RI and their two daughters, Anna and Bethie. Ellen outlived her husband, Chuck, of 51 years and her two sisters, Jeanne Draughn and Peggy Coveney of West Palm Beach. We are very thankful that Ellen was healthy with a clear mind until the last few weeks of her life.

Ellen Gose Miller passed away on July 4 2021 at the age of 94. Ellen was born and grew up in Castlewood, VA, graduating from Temple Hill High School. She attended Johnson City Business College where she obtained a degree in office administration... View Obituary & Service Information

The family of Ellen G Miller created this Life Tributes page to make it easy to share your memories.