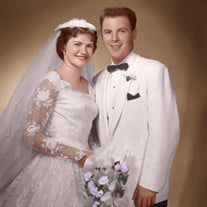 Eileen Francis (Molloy) DiCaprio died on February 9, 2021 in West Palm Beach, FL at the age of 86 after a short illness. She is pre-deceased by her adoring husband James (Jim). She leaves behind her beloved children James (Jim), Thomas (Tommy), Linda (Amaral) and Susan. Eileen was blessed with eight grandchildren that she loved dearly – Ashley, Brianna, Lauren, Tierney, Delaney, Nicole, Will and James. Eileen was born in Jersey City, New Jersey to Thomas and Cecilia Molloy. Her parents were immigrants; Cecelia from Ireland and Thomas from Canada. Eileen had seven sibling and plenty of extended family. She attended Saint Aidan’s Catholic School in Jersey City, New Jersey. Eileen met the love of her life, Jim on a chance weekend getaway with friends to the New Jersey shore. They met on the beach and it was love at first sight for both of them. They dated for a year seeing each other on weekends when they weren’t working or at night school and married on July 18, 1959, exactly one year after they met. Eileen and Jim settled in Yonkers, New York living in two residences before they settled in their dream home, a gorgeous center hall white colonial, in Yonkers where they made wonderful family memories for three decades. Eileen was lovingly a stay-at-home mom for her four children. You would often see her driving them around in her orange Volkswagon bus she was so well known for. When the kids got a little older, she worked part-time jobs that she enjoyed including Fuller Brush and Pezrow. Eileen and Jim moved to Florida in 2010; they were done with the New York winters. They rented in Ocala, Florida for two years until their son, Tommy could move down and find a place for the three of them to live in which they found in West Palm Beach, Florida in 2012. Tommy was a loving and selfless caretaker for his parents and especially his mother the two plus years after Jim’s death. Eileen requested to be cremated. Her ashes will be interred at Woodlawn Cemetery in the Bronx, New York at a later date. There will be no wake or funeral. Flowers are not necessary however, if you have a special memory of Eileen, please send a note or e-mail to one of the family members. That would be especially appreciated. Memories are all we have now.

Eileen Francis (Molloy) DiCaprio died on February 9, 2021 in West Palm Beach, FL at the age of 86 after a short illness. She is pre-deceased by her adoring husband James (Jim). She leaves behind her beloved children James (Jim), Thomas (Tommy),... View Obituary & Service Information

The family of Eileen Frances DiCaprio created this Life Tributes page to make it easy to share your memories.