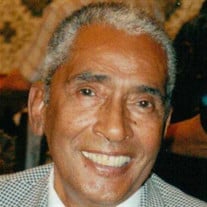 Edmund C. Willoughby - Nov 3, 1930 - Dec 14, 2019 Edmund C. Willoughby, lovingly known as Carl, was born on November 3, 1930 in Harlem, New York City to Olga and Carlyle Willoughby. He had two older sisters, Thelma and Elaine, who both predeceased him. After graduating from high school, Carl enlisted in the United States Army and served in the 2nd Infantry Division during the Korean War. Upon returning home, he became an Army Recruiter in Harlem. Sergeant Willoughby finished his service with the Army as a decorated veteran who was awarded several medals commemorating his heroism and commitment to service. In 1953, he married Marilyn Turner. From this union, two children were born, Carl and Wendy. After the Army, Carl studied to become an electrical engineer and worked for the New York City Transit Authority for many years. Upon his retirement in 1988, he relocated to Florida where he married Mary Harvey. Family and friends fondly remember Carl as a witty individual with a self-effacing and quick sense of humor. He was also a vivid storyteller and could recount endearing and humorous tales about his years in elementary school right through his adult life. He loved life and enjoyed swimming, bowling and golf. Among his creative talents, Carl was a stained-glass enthusiast and artist. Carl is survived by his loving wife Mary, his children Carl and Wendy, daughter-in-law Monica, son-in-law Anthony, grandchildren Austin, Ashley, Monique, Braxton, and Dayne, great grandson Elijah and a host of nieces, nephews, cousins and friends. Carl will be laid to rest at the South Florida VA National Cemetery

The family of Edmund C. Willoughby created this Life Tributes page to make it easy to share your memories.