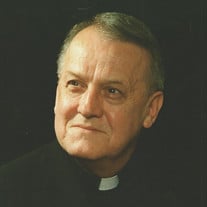 REVEREND EDMUND LADISLAUS SZPIEG, a Priest of the Catholic Diocese of Palm Beach, Florida, passed away on July 5, 2019. Father Ed was born on February 23, 1930 in Detroit, Michigan. A son of immigrants from Poland, he took great pride in his Polish heritage. Ed's interest in a vocational path toward Priesthood began early in life but was not finally realized until the age of 64. His first inspiration for a vocation to the Priesthood was nurtured by the faith of his Catholic parents and the priests and nuns at Our Lady Queen of Apostles Church and Grade School in Hamtramck, Michigan. After completing Cass Tech High and Wayne State University in Detroit, Ed was drafted into the U.S. Marine Corps. Following his service in the Marines, Ed joined the IBM Corporation in Detroit, Michigan and held executive administrative positions with IBM in Detroit, New York, and eventually in Boca Raton, Florida where he retired after 32 years. While at IBM in Boca and following his IBM retirement, Ed was an active parishioner in many ministries at Ascension Church in Boca, including the Palm Beach Catholic Charities Prison Ministry Program, a ministry he continued throughout his 22 years as priest. Finally, in 1991, at the age of 61, with prayer and encouragement of Father Morgan, then Pastor at Ascension, the Ascension Family and Diocesan priests, Ed finally followed his lifelong spiritual calling and entered St. Vincent de Paul Regional Seminary in Boynton Beach, Florida. On May 29, 1994, Ed was ordained to the Transitional Diaconate at Ascension. On December 16, 1994, at the age of 64, Ed was ordained to the Priesthood at the Cathedral of St. Ignatius Loyola in Palm Beach Gardens, Florida. His first assignment was as Parochial Vicar, and then Pastor, of Our Lady Queen of The Apostles Church in Royal Palm Beach, Florida where he quickly endeared himself to the parishioners and children of the parish. Two years later he was reassigned as Pastor of St. Elizabeth Ann Seton Church in Port St. Lucie, Florida, where he served for 20 years until his retirement in July 2014. Father Ed was predeceased by his parents Lottie and Joseph Szpieg, sister Geraldine Krygiell and brother Cass. He will be greatly missed by his sister Eugenia and her children Paul, Maria and Lisa; nieces, nephews, cousin Helen, and family in Poland. Funeral arrangements have been entrusted to the PALMS WEST FUNERAL HOME, 110 Business Pkwy., Royal Palm Beach, FL (561-753-6004). Visitation will be held Thursday, July 11, 2019 from 5:00 PM – 8:00 PM at Our Lady Queen of the Apostles Catholic Church 100 Crestwood Blvd. South, Royal Palm Beach, FL (561-798-5661), with a wake service beginning at 7:00 PM. A Mass of the Resurrection will be celebrated Friday, July 12, 2019 at 11:00 AM at Our Lady Queen of the Apostles Church. Following mass, interment with Marine Honors will be held at Our Lady Queen of Peace Cemetery, 10941 Southern Blvd., Royal Palm Beach, Florida. Memorial donations may be made to The Poor Clare Nuns, Christ the King Monastery 3900 Sherwood Blvd., Delray Beach, FL 33445 (561-998-3294).

REVEREND EDMUND LADISLAUS SZPIEG, a Priest of the Catholic Diocese of Palm Beach, Florida, passed away on July 5, 2019. Father Ed was born on February 23, 1930 in Detroit, Michigan. A son of immigrants from Poland, he took great pride in his... View Obituary & Service Information

The family of Reverend Edmund Ladislaus Szpieg created this Life Tributes page to make it easy to share your memories.

REVEREND EDMUND LADISLAUS SZPIEG, a Priest of the Catholic Diocese...