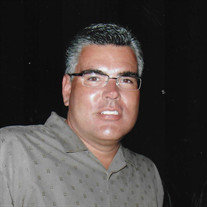 Dove Leroy Carter was born June 5th, 1965 in Santa Monica, California to Garry and Julia Carter. His brother Timothy Carter was born t wo years later, and t hey grew a very close brotherly bond. They spent t heir childhoods surrounded by a close knit family of grandparents, aunts, uncles, and many cousins who were all like siblings t o him. Dove l oved spending time at the beach, skateboarding, playing football, and his personal favorite was riding motorcycles. After graduating from highschool, he enlisted in the United States Air Force at Edwards Airforcebase in Lancaster, California. He made i t t o an elite division of Special Operations, Pararescue. Dove was always very proud of t his part of his life, and made many lifetime memories of his travels, jumping f rom helicopters, saving people who crashed into mountains, t raining other members, and scuba diving. While in t he Air Force, Dove met his wife, Natalie. They f ell madly in love and were inseparable. He loved her every day, he never stopped his romantic gestures, and showed how much he cared for her until his last day on earth. They were married f or 35 years, a life filled with amazing memories and silly moments in between. During t his time, they had a beautiful daughter named Amber, who now resides in Florida. Dove was a humorously strict father, but always wanted t he very best f or her. He always tried t o be a good mentor f or t he youth, working with the children ministry, the Royal Rangers, and helping children in the community. Dove left the military to help his father with his construction company, but unfortunately, his father passed away from cancer soon after he joined the company. Dove worked his way up t o Senior Vice President positions with various organizations in finance and operations. No matter where his success brought him, Dove never forgot his family on the reservation. He spent many, many weekends traveling between Minnesota and Wisconsin, giving back to his tribe on the reservation, delivering food & furniture, donating t o educational purposes, and providing guidance and counseling. Dove helped design and build t he school building for LCO reservation. They are proud of t hat school till t his day. Dove was a generous and caring man, and he was important t o every life t hat he helped. His sense of humor, wisdom, and open heart t o every human he crossed made him an amazing friend, family member, husband, and father. He was taken f rom us too soon, but we know he is in the arms of t he Father and with his beloved family t hat went before him. He will be greatly missed, but never forgotten. He went t o be with his heavenly father, June 18th, 2021, at t he age of 56. He is survived by his wife Natalie, daughter Amber, his brother Timothy, along with many other extended family members, whom he l oved very much. We love you Dove, now, always and forever. A Celebration of Life service will be held at Emmanuel Baptist Church, July 17th, 2021 at 2:00 pm.

The family of Dove L. Carter created this Life Tributes page to make it easy to share your memories.