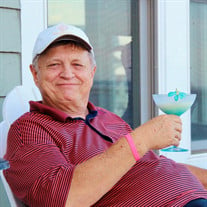 Douglas James Taylor passed away peacefully at home on August 11, 2021 at age 79. Beloved husband to Eileen (Bolger) for 37 years. Proud and loving father to Kathleen Mullery (Stephen), Regina “Genie” Strong (Frank), Bridget Greer (Chad), and Erin Hand (Guy). Doting Grandpa to 11 grandchildren: Patrick, Claire, Matthew, Sean, Katherine, Conor, Bridget, William, Charlotte, Luke, and Thea. Loving son to the late Leon Scott and Marie Stadler Taylor. Brother and friend to Jerry, Steve, Janice Taylor Dunham, and the late Grace Taylor Richards, as well as a loving uncle to many nieces and nephews. Doug was born in Appleton, WI on August 2, 1942. His family moved to Miami, FL a few years later. Doug attended Gesu Catholic School and Monsignor Curley High School (‘60), where he was a standout football, basketball, and baseball player and formed many friendships that lasted throughout his life. Doug began his career with the Miami Herald in 1961, working nights in the Production Department, while attending Miami Dade Community College. Doug’s career at the Herald was interrupted in 1966 by his service in the United States Army. He served honorably, achieving the rank of 1st Lieutenant. During his tour in Vietnam, Doug distinguished himself with great courage and valor, for which he was awarded the Soldier’s Medal. After completing his military service, Doug returned to the Miami Herald and moved from Production to Retail Advertising Sales, where he excelled and achieved much success. After 26 years at the Miami Herald, Doug moved to the Boca Raton News and continued in advertising for another decade. In 2001, Doug started a second career with Palm Beach County, working in Public Affairs, two County Commissioners’ offices, and Fixed Assets. In 2012, he retired again to do the things he enjoyed most. Doug was larger than life! He was so much fun to be around and made friends everywhere he went. His love for his family had no bounds. Doug relished cooking and entertaining for family gatherings, and always felt “the more the merrier.” He enjoyed the challenge and fun of playing golf and cards, and as he did with everything else in life, tried hard to excel at both. Doug was a lifelong University of Miami football fan and had the UM wardrobe to prove it! No doubt he is rooting for a great season this year! Doug will be loved and missed more than words can express. We know he is resting peacefully in God’s arms now and watching over all of his loved ones, until we are joined with him again. Family will receive friends Thursday, September 2nd, 2:00pm-4:00pm and 6:00pm-8:00pm, with a prayer service at 7:30pm, at Palms West Funeral Home - 110 Business Park Way, Royal Palm Beach, FL 33411. A Mass of Christian Burial will be held on September 3rd at 12:00pm at St. Rita Catholic Church - 13645 Paddock Drive, Wellington, FL 33414. Graveside Service will follow the Mass at the South Florida National Cemetery - 6501 S. State Rd 7, Lake Worth, FL 33449. Memorial contributions may be made in Doug’s honor to the Wounded Warrior Project or Folds of Honor Foundation.

The family of Douglas James Taylor created this Life Tributes page to make it easy to share your memories.

Douglas James Taylor passed away peacefully at home on August...