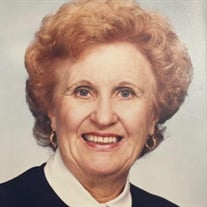 Dorothy was born in Lake View, Iowa, on September 3, 1924. She passed from this world at Wellington Eldercare with members of her family at her side on November 30, 2020. She was 96 years of age. Her parents were Fred P. and Emma (Geier) Meister. Dorothy was a venerable and respected member of the Greatest Generation. As the eldest in a family of five children, she was a woman of strong character and determination. She learned to adapt and endure as the result of the hand of fate that was dealt to her throughout her life. Growing up during the Depression, she was forever chasing away the fear of poverty by working hard, earning money and saving. At the age of 16, she was told by her parents that 8th grade would be the end of her formal education and that she would be sent to Chicago, Illinois, to be a “mother’s helper” so that money could be sent home for her family. After that employment ended and while she was a waitress near her home in Iowa, she met her future husband, Paul Raymond Harlow. They were married on July 10, 1943, in Des Moines. Dorothy went on to know life’s struggles when she became a young widow with three children to raise when Paul died on September 8, 1959. Her first home in Des Moines was purchased by a utility company needing the land to expand. She then used the money to buy the first in a series of businesses that she would work hard to improve and then sell one at a time for a profit: Harlow Hall, a nurses’ dormitory in Carroll, (where she also was an accomplished Avon saleswoman); The Hillcrest Motel in Sioux City; The Village Bowl in Alcester, South Dakota, which was a bowling alley, bar, restaurant, and motel; and an A&W drive-in in North Sioux City. The Midwest winters were the driving force for Dorothy to move to Florida, where she managed a mobile home park in Homestead. She then moved north to manage Colonial Coach Mobile Home Park in Greenacres. Her last formal job was that of school library assistant (through a seniors program) where she worked at Greenacres Elementary. In her 80’s, Dorothy remarried. She was married to William Juslin for 10 years, and he predeceased her. Besides being known as a loving and caring mother, hard worker, and shrewd businesswoman, Dorothy was known for her many cliches, such as “Holy Toledo!” (when surprised); “If you have time to lean, you have time to clean.” (for her employees); and one that she told her children very often: “Get a good education. They can’t take that away from you.” The last ten years of her life she was cared for at Wellington Eldercare, as she progressively suffered from dementia, which was compounded by a fall in the hospital prior to her entering residence there. Dorothy is survived by her three children: Richard Harlow, married to Elaine and grandson Dustin; Sandra Samore, married to David and their sons Dylan (wife Caryn and great-grandson Everett) and Bradley. Sharon/Sherri Harlow is the youngest of Dorothy’s children. Dorothy is also survived by her sister, Rosemary Schuler of Carroll, Iowa, along with many nieces and nephews of Dorothy’s siblings. Besides her parents and two husbands, she was predeceased by sisters Donna, Mardelle and brother Darwin. Rest in peace now, Dear Dorothy. You worked and worked to make the world a better place.

Dorothy was born in Lake View, Iowa, on September 3, 1924. She passed from this world at Wellington Eldercare with members of her family at her side on November 30, 2020. She was 96 years of age. Her parents were Fred P. and Emma (Geier)... View Obituary & Service Information

The family of Dorothy Harlow Juslin created this Life Tributes page to make it easy to share your memories.