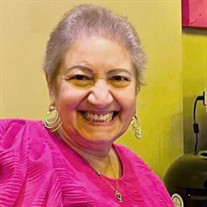 Doris De Lima Apostolidis, age 64, passed away April 14, 2022, at her home in Royal Palm Beach Florida surrounded by her family in their arms. Doris was born in Minas Gerais, Brazil on February 15, 1958, to Maria Rita and João Verola who she is now able to hug and never let go. Doris lived in Brazil up until she was about 30 years old. She decided to move to New York for some change and excitement in her life. She had a bachelors degree in economics and gave it up to start over in a country she didn’t know the language. She cleaned homes for a living and was very proud of what she did. After many years of living in New York meeting new friends, reconnected with old friends from Brazil, enjoying her life, with the biggest smile on her face, she met Hercules Apostolidis. They soon got married and had a daughter named Alexia Verola Apostolidis. Herc and Doris loved each other very much up until the end of her life, and he will continue to love her. Doris was very involved in Alexia’s life and she not only was her mother, but she was her best friend. Doris could be friends with anyone with her radiating smile and love for people. There is not one person who could not love Doris. She enjoyed spending times with her loved ones, traveling, and making sure she looked nice. A few of her favorite trips included Times Square NYC, Rome, and a cross country road trip to California with her Herc, Alexia, and their dog Rosie. Doris was diagnosed with dedifferentiated chondrosarcoma cancer in the summer of 2018. She fought and survived for four years, living longer than most with this very aggressive cancer. She never complained and inspired so many people that knew her. Doris will be forever remembered by her sister Lúcia, Maria Rita, Leda, Dulcelea, Valda (Tião), her brother Cleiro, and sister Vânia (Pedro). Preceded in death by her brother-in-laws Paulo, Antônio and Gilmar. Her daughter Alexia will never forget the impact her mother has made on her. As well as, her four stepchildren: Michael (Christie), Eleni, Jolene (Tom), and Heather (Jesse), and her four step grandchildren Judi, Elizabeth, Amanda, and Abigail. May her happiness and love be eternal.

Doris De Lima Apostolidis, age 64, passed away April 14, 2022, at her home in Royal Palm Beach Florida surrounded by her family in their arms. Doris was born in Minas Gerais, Brazil on February 15, 1958, to Maria Rita and João Verola who she... View Obituary & Service Information

The family of Doris De Lima Apostolidis created this Life Tributes page to make it easy to share your memories.