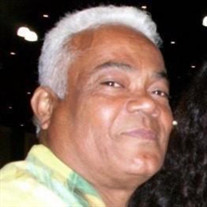 Our beloved Donald Pearce’s spirit, went home quietly, in the early morning of September 24, 2021. Known affectionately as Poppa, Nida and Danny, this strong, humble, loving 77-year-old man, fought and held on for over a year of illnesses/injuries. He, his wife Patricia, his daughters Lisa and Donna and eldest granddaughter Chelsea, were also admitted to the hospital in June of 2020 at the start of the Pandemic. Donald and Pat were very ill and a year and 3 months later, Donald lost the ﬁght. He worked diligently and selﬂessly for his family throughout his lifetime. He was an ardent supporter of his 7 siblings and they were a very close knit family. An avid soccer player, Cavaliers in Jamaica, West Indies United in Canada, Welder (Kingston Industrial Works, Alcan, Transit bus driver (Toronto Transit Commission, Greyhound), Driver/Owner Operator, Ramp/Supervisor (Air Jamaica, American Airlines), Owner Operator (PRH ALF). Of all of his trades and titles, they pale in comparison to Husband, Daddy, Grandpa, Poppa, Uncle, Brother, Cousin and Friend. He is survived by his wife of 54 years, Jeanette/Patricia of which they have 2 children – Lisa and Donna; their 4 Grandchildren – Chelsea, Bailey, Bryan Jr and Brenden; and their Great-Grandson, his little best friend CJ. A simple man with simple tastes, his love and loyalty for his family and friends, was renowned by all. He was born to Fabian Pearce and Alvera Pearce (Brown) in Kingston Jamaica, 1 of 8 children. Donald’s children (and grands) are blessed to have amazing Pearce Uncles and Aunties. He joined his eldest brother Clive who preceded him in 2020 and was awaiting his arrival in heaven. He leaves behind his siblings, Rudolph (closest in age and his partner in crime), Fabian (Jr), Paul, Joy, Kathleen and Dawn. His 24 nephews and nieces as well as grands, jewels in his eyes, will surely miss their uncle. With the many in-laws he had, they were never referred to as such - they were his brothers and sisters. Everywhere he has travelled, you will ﬁnd a legacy of people that love him and have stories that will leave you smiling and crying at the same time. Lisa and Donna have shared their Poppa with many others. Nieces and nephews call him their 2nd father. His friends’ children also call him their father. The belly he is known to have had, has mileage. Many children have fallen asleep and played and laughed on that belly. In his later years, his only true selﬁsh desires were his motorcycle and working on his boat. That’s all he truly wanted to do. While on that boat, you could see his joy, taking his great-grandson CJ ﬁshing, just enjoying that simplicity. Did you know that Donald is a hero? In his days in Canada a young girl’s scarf was caught in the door of a vehicle. The driver took off, not knowing that the little girl was being dragged and choked. He chased down the vehicle in the bus that he drove, and was able to alert the driver, thereby saving her life. He also was known to have 9 lives. Did you know that he died, and came back to life after being declared dead by hospital ER staff? While they were ﬁshing at a lake, a friend was trapped underwater. Donald jumped in and was able to locate him in the deep and pushed him up and out. Donald himself was then trapped in the same area. By the time they found him and airlifted him, worked him, he was pronounced ‘dead’. He tells the story of going to heaven but being sent back, because it was not his time. To honor his memory, donations may be sent to: St Rita Catholic Church 13645 Paddock Dr., Wellington Fla 33414. . A celebration of his life, with Donald in his simplicity, will be held on Friday Oct 8th. Danny was an easy-going man, so feel free to dress comfortably. He always said he did not want anyone dressing in black and crying… he wanted everyone to wear colors and to celebrate. If you have a Danny or Uncle or Nida story and we'd love to hear them all. To share a memory of Donald or send a condolence to his family please visit https://www.palmswestfuneralhome.com/obituaries/Donald-Pearce-5/ Palms West Funeral Home, Royal Palm Beach Florida.

Our beloved Donald Pearce&#8217;s spirit, went home quietly, in the early morning of September 24, 2021. Known affectionately as Poppa, Nida and Danny, this strong, humble, loving 77-year-old man, fought and held on for over a year of illnesses/injuries. He,... View Obituary & Service Information

The family of Donald S. Pearce created this Life Tributes page to make it easy to share your memories.

Our beloved Donald Pearce’s spirit, went home quietly, in the...