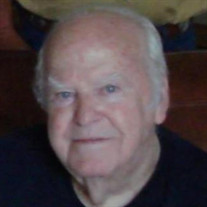 Donald J. Brinker, age 89, died peacefully in his home in Royal Palm Beach, Florida surrounded by his loving family on Saturday, May 22, 2021. Don was born on December 19, 1931 in Lisbon, Ohio. He was a 1949 graduate of David Anderson High School in Lisbon, Ohio where he excelled in art, basketball and football. He attended St. Jacob’s Evangelical & Reformed church where he formed lifetime opinions of caring for and about others. In 1955 he moved to New Bethlehem, Pennsylvania and worked for Crawford Furniture where he met his future bride, Patricia Carlos. They were married on June 12, 1957. He had four children before moving to Ohio in 1966, where he worked for many years as a manager at Estherlee Fence Co. before venturing out on his own building and contracting career. He moved to Florida in 1979 where he continued in the building business until he retired in 2009, at the age of 78. Don’s real passion was art. He was a gifted, self-taught artist of multiple mediums. His love of nature was translated into beautiful creations of paintings, drawings and his amazing carved wooden ducks and birds. There was always a magic about him that came alive in his works of art. His vision and his hands were his gift. He could transform absolutely anything into beautiful perfection. His secret talent, however, was his beautiful singing voice. One of his favorites was Edelweiss. He was also a gifted whistler. His twinkling blue eyes held so much life and compassion and he was an inspiration to all who knew him. He was a loving, strong and fun dad to all his kids. He patiently taught his children to freely mold their own unique talents and aided in their strengths which has carried through to his grandchildren. He taught his children values, swimming, woodworking and painting. His children are proud to call him Dad and grateful for all he was. He is truly missed and “we love you back”. Retired Contractor, Artist & Sportsman December 19, 1931 – May 22, 2021 Born in Lisbon, Ohio to Opal (McMillan) and Rollin Brinker Don is survived by his beautiful bride of 64 years, Patricia (Carlos), four children, Brenda Begalla of Chardon Ohio, Barri Brinker-Cupp (Rod Parker) of Royal Palm Beach, Florida, Douglas Brinker of LaBelle, Florida and Barbara Marrama (John David) Schmidt of Columbiana, Ohio, 6 grandchildren, Nick Begalla, Patrick Begalla of Chardon, Ohio, Jessica Cupp of Boardman, Ohio, Andrea Marrama of Orlando, Florida, Caitlyn (David) Haught of Lisbon, Ohio, Ashley Cupp of Charlotte, North Carolina and 2 great grandchildren Brooklynn Haught and Ryder Haught of Lisbon, Ohio. He is survived by his sisters Evelyn (Carl Stacey, Jr) of Columbiana, Betty Harding of Lisbon, Ohio and Velma (Tom) Covert of Salem, Ohio. Don is preceded in death by his parents Opal (McMillan) and Rollin Brinker, brothers Bill, Bob Arch (Bus) and Gary Lee Brinker, sisters Mary Malloy and Ila (Gary) Hall. There will be no services. The family requests that, in Don’s honor, go outside and enjoy the beauty that is around you without your cellphone! Visit the Palms West Funeral Home to share your stories of remembrance. www.palmswestfuneralhome.com

Donald J. Brinker, age 89, died peacefully in his home in Royal Palm Beach, Florida surrounded by his loving family on Saturday, May 22, 2021. Don was born on December 19, 1931 in Lisbon, Ohio. He was a 1949 graduate of David Anderson High... View Obituary & Service Information

The family of Donald J. Brinker created this Life Tributes page to make it easy to share your memories.