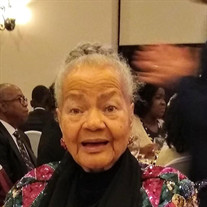 Dolores B. Hawkins was born Dolores Vivian Tanner in Chicago, Illinois on November 2, 1929. Dolores was the sixth child of George Marshall Tanner and Ruth Marie Holliday Tanner. Their children were Maxine Ophelia, George, Alvin, Carlyle Wesley, Bernard Ian, Dolores Vivian, and Jacqueline Laura Tanner. Dolores was known to all close friends and family by her nickname, Dodo, which was given to her by Bernard when he was little. She attended Washington Elementary school, and Proviso High school in Maywood, Illinois, a suburb of Chicago, where the family lived. Dolores attended Roosevelt University as a music student where she met her husband Joseph (Sepp) Bauer, her voice professor. They were married in 1949 and spent 15 happy years together before Joseph’s Death in 1964. She was particularly fond of her stepson, Dr. Wolfgang Bauer, Joseph’s[SP1] son by a previous marriage who lived in Germany. After ’s death, Sepp’s death she moved to New York City to practice her profession as an opera singer. She and some friends formed the Cosmopolitan Troubadours Opera group and toured the USA for a couple of years. Then Dolores went to Europe with an opera company and spent a few years touring throughout Europe. Dolores returned to the USA at the request of her father to study the Bible. Therefore, she returned in 1974 and began to study with a Jehovah Witness in Atlantic City, NJ, attended meetings and was baptized on June 15, 1975. Dolores went to St. Paul Minnesota to attend her niece’s baptism at convention in July 1975 and decided to move to St. Paul to live with her brother, Carlyle, and his family giving up the glamourous lifestyle of an opera singer. Dolores had known Charles Hawkins in Atlantic City, New Jersey, and after his baptism, she agreed to marry him. Dolores and Charles Hawkins were married in July,1976 in St. Paul, Minnesota where they lived until 1980 at which time they moved to Maywood, Illinois so that Dolores could care for her ailing father, George Tanner. After his demise, they moved to Woodland Park, Michigan. Dolores and Charles (Charley) Hawkins lived together in this beautiful fishing and hunting resort area, surrounded by lakes and in the heart of a Forest preserve for 22 years until Charley’s death on November 9, 2002. Their nephews, Mike, Mark, and Tony Goldman would spend summer vacations with them along with other friends from Chicago area. Carlyle, his wife Linda, his daughter Theresa, and granddaughter, Lydia would also spend time with her in Woodland Park, Michigan. After Charley’s death, Dolores continued to live in Woodland Park with the support from her local congregation and other nearby congregations until the winters became too harsh and her health too fragile for her to live alone isolated in the forest. At the advice of the brothers, she and moved to an apartment in Idlewild, Michigan closer to the kingdom Hall and most of the Witnesses. For the past 13 years Sandra and her two sons, Marshall, Mark, and his family, would spend a few days with her in the winter in Michigan, then bring her to South Florida to enjoy the warm Florida weather taking her back to Michigan to enjoy Spring and Summer. The past five years Dolores her has been living in Loxahatchee, Florida with her niece, Sandra, and grand nephews, Mark, and Marshall (Tony) Goldman until she fell asleep in death on Sunday, March 7, 2021 at Mark’s home in Loxahatchee, FL; her niece by her side. Dolores was preceded in death by all her siblings and her nephew Albert Wesley Stump. She was survived by her family of nieces and nephews, grandnieces and grandnephews and their children, her sister-in-law Linda Tanner, Theresa Tanner and daughter, Lydia Affleck. Albert Wesley Stump’s (deceased) wife, Mamie Stump, and their children, Albert Wesley Stump Jr. Charles Marshall Stump, Brenda Wilson, and Joyce Mister, and Angela Seaton; Sandra and husband, Jean Claude PAUL, his son, Stephane Paul and his children, Sandra’s children Willy Michael Goldman & wife and children, Mark Alexander Goldman & wife and children; Marshall Anthony; Patrick Goldman & wife and children; Quetly Lafrance and husband & children and their children; Eunice EDWARDS, and her children--Anthonya Edwards & daughter, Jammiah Edwards and son; Jason, Adrian, and Ahleah Edwards; Bernard Ian TANNER Jr; Deborah TANNER and her children--Brandy King and husband Ryan, & their daughter; George & Tiffany; Rachael and husband Damien VANN, their children--Jorden, Tamia, Jamai and Tyler Campbell; Michael Timothy Tanner; Janice EVANS and family; Gerald BULLOCK and children, Burl & Jackie; Joy NUNEZ and children and their children; and The Tanner, Stump, Paul, Goldman, Edwards, Bullock, Evans, Vann, Campbell, Lafrance, Robillard, Seaton, Tucker, Healy Affleck, and Mecklembourg Families.

The family of Dolores B Hawkins created this Life Tributes page to make it easy to share your memories.

Dolores B. Hawkins was born Dolores Vivian Tanner in Chicago,...