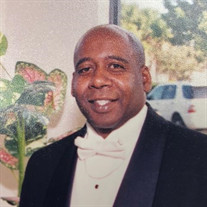 Dexter Neil Marshall- Age 60, Died on August 27th,2021, form heart complications. Born October 3, 1960 to parents Selwyn and Mable Marshall, in Trinidad and Tobago. Dexter and family moved to Brooklyn New York when he was 11 years old, this is where Dexter spent his formative years, he went onto college and got his first Job at JP Morgan and Chase Bank. As parts of the family relocated to Florida, he decided to do the same at the age of 30 years, where he started working at The Post office on Summit. Dexter worked there for over 25 years on the nightshift before he retired in 2017. Dexter was a devoted son to his mother Mable and adored his big brother Colin, if fact, when all three were together they were always laughing at some private joke amongst themselves. They have both preceded him. In 2003 and 2005 Dexter became a father, he was devoted to his two girls and wanted nothing else than to see them happy. He was an avid chess player and played the piano by ear, a gift he passed to his daughter Arianna, and his love of music, particularly “Yanni” and Michael Jackson, his two favorite artists to his daughter Alexandria. He retired from the Post office in 2017 and spent his days taking his girls wherever they wanted or needed to go, spending time with them, playing his music and chess. Dexter is Survived by his 2 daughters Alexandria and Arianna Marshall, Nephew Justin Marshall, Nieces Alyssa Marshall and Stephanie Joseph. Sister Heather “Trudy” Marshall Ahye, Sister-in-Law Dahlia Marshall, Aunt Golinda Warner, Cousins Carlton Isa Warner, Natalie Warner Charles and Carlene Warner Anan and other relatives and friends. Family and friends are invited to attend a Celebration of Life Service on Saturday, September 11th, 2021 from 10:00am -12:00pm at Palms West Funeral Home and Crematory, 110 Business Park Way, Royal Palm Beach, FL. 33411. Viewing at 10:00am-10:45am. Service starts at 11:00 am.

The family of Dexter Neil Marshall created this Life Tributes page to make it easy to share your memories.