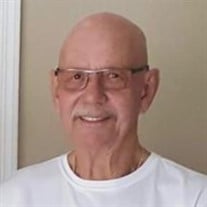 Dennis Miller, 72, passed away peacefully at his home on October 27th 2020, surrounded by his loving family, after a hard fought battle with cancer. He is survived by his wife Doreen, his daughter Brandie (John) Fernandez, his step son Nic (Stacy) Sinibaldi, step daughter Deana (Troy) Jenne and 5 grandsons, Mason Crawford, Trey and Tyler Holt, Dominic and Connor Sinibaldi and nephews, Brian (Bernice), BJ (Angie), and Barry (Angie) Hensley. Born in Sweetwater, TN the son of Glen Miller and Stella (Hutsell) Miller, Dennis moved to Belle Glade from Tennessee when he was 10. He attended Belle Glade High school and subsequently enlisted in the Army (Airborne/Infantry), during the height of the Vietnam War. After completing his military service, he returned to the Glades and began employment with Hutchinson Engineering as a surveyor. He developed an interest in the construction industry and obtained his General Contractor license in 1978. He started working for Edens Construction and eventually became president of the Company in 1996 until his retirement in 2017. During his 41 years with Edens, he established a separate division of the Company which consisted of Site Development and underground utility work. He was involved with numerous projects throughout Palm Beach and Martin County. Dennis achieved the respect and admiration of many in the industry for being an honest, conscientious, and dependable contractor. Dennis was a member of the Elks Club and American Legion. He was an avid fisherman and loved heading out on his boat at daybreak “to catch a few”. He frequently said, “Going fishing is the best therapy in the world”! Dennis was a man of high character and exuded many of the characteristics we all wish we could possess. He was loyal and compassionate, successful yet humble, confident but not arrogant, intelligent but never condescending. He will be fondly remembered by all who were fortunate enough to have Dennis in their lives. Donations may be made in Dennis’ name to your charity of choice. Services will be held at 11:00am Monday November 2nd at First Baptist Church of Belle Glade 17 NW Ave B, Belle Glade, FL.

Dennis Miller, 72, passed away peacefully at his home on October 27th 2020, surrounded by his loving family, after a hard fought battle with cancer. He is survived by his wife Doreen, his daughter Brandie (John) Fernandez, his step son Nic... View Obituary & Service Information

The family of Dennis R. Miller created this Life Tributes page to make it easy to share your memories.

Dennis Miller, 72, passed away peacefully at his home on October...