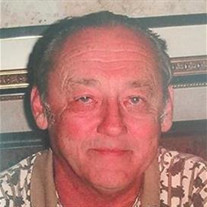 David G. Lauterborn Sr. - January 5, 1939 – July 18, 2019 David G. Lauterborn Sr. was born January 5, 1939 in Teaneck New Jersey to George Frank and Cecelia Agnes Lauterborn. He was raised in Hasbrouck Heights New Jersey along with his sister Alice Salem. He graduated in 1957 from Hasbrouck Heights High School. He started his career at Bell Telephone following in his father’s footsteps. He retired as a central office technician after 30 years of service in 1988. He raised his family in Toms River New Jersey where he was one of the founding members of the East Dover Little League. He spent years enjoying coaching the little league baseball teams. He married Abigail Siems Gile in 1987 and they moved to Jupiter Florida where they enjoyed fishing on their boat and taking their family to Disney World. He and Gail enjoyed their back and forth trips to New Jersey to spend time with their families and the activities of their grandchildren. He was predeceased by his parents, his son David Jr. his daughter-in-law Anna Mae, his grandson David III, his brother in law Andrew Salem and his step-daughter-in-law, Cheri Gile. He is survived by his loving wife of 32 years Abigail, his sister Alice, his sister-in-law Barbara Davis, his children, Linda and Rudy Frank, Susan and Raven Ramirez, his step children Allan F. Gile Jr., Mark and Christina Gile, and Terry and Chris Rooney. He is also survived by his grandchildren Christina and Daniel Morales, Matthew and Kathryn Frank, Kelli and Mark Bloniarz, Kaitlin Frank, Brian Zahlmann and Amanda Zahlmann, Crystal Lynn and Steve Vidalis, Donny, Jarod, Jessica, Nichole, Alex, Hannah Gile, Connor Rooney and Hailey Rooney. Great grandchildren David IV, Cameron, Loralei and their mother Leslie, Vincent, Evalynn, Madison and Alexzander, also nephew Pete and Judy Salem, his nephew Drew Salem, his niece Marianne and James Gribbon and many cousins, nieces and nephews. There will be a memorial service at Palms West Funeral Home in Royal Palm Beach Florida on Thursday July 25th from 6 to 8 pm and a memorial service at Horizon Funeral Home and Cremation Services at 1329 Route 37 W, Toms River, NJ 08755 on Sunday July 28th from 10 am to 12 pm. A Celebration of Life will follow on Sunday July 28th from 1 to 5 pm at the Lacey Elks 900 Beach Blvd Forked River NJ 08731

The family of David George Lauterborn Sr. created this Life Tributes page to make it easy to share your memories.