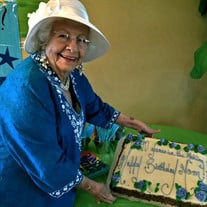 Darlene Rose Bednarczyk — February 27, 1926 – June 19, 2016 Darlene Rose Bednarczyk, passed away peacefully at her home in Greenacres, Florida on Sunday June 19, 2016. Born in Chillicothe, Missouri on February 27, 1926 to Scott and Rose Walker she is survived by her son, Kevin Bednarczyk , of Greenacres, FL and Ed Bednarczyk and his wife, Nancy of Camano Island, WA. She is also survived by her brother Dave Walker of Chillicothe, MO and her three grandchildren; Dan Chaplin, Damian Bednarczyk and Tara Bednarczyk. She loved and enjoyed her nine great grandchildren: Mia, Alex, Gabriel, Kiley, Conner, Maggie, Timothy, McKinzie, and Jaylon. She is pre-deceased by her husband Leon Bednarczyk, son Richard Bednarczyk and daughter Sandra Chaplin. Her years as a child were enjoyed living on a farm in Chillicothe, MO. At the age of 17, she left the country for the big city and moved to Washington, D.C. with her sister, Wanda to work for the War Information Office during WW II. There she met the love of her life, Leon Bednarczyk (Boatswain’s Mate U.S. Navy) and after a four and a half week courtship, began a loving 42- year marriage. They lived in Stuart, Fl after the war, then Chicago, IL, Chillicothe, MO and finally settled in New Haven, CT, where they lived until 1970. They later moved to West Palm Beach and eventually Greenacres, Florida. She was very proud of the fact that when asked her profession, she proudly said, “housewife.” Family meant everything to her. She wrote the “best seller” on how to be a Mother! With love and outstanding wisdom, compassion, understanding, courage, guidance and laughter, she and her husband raised four loving and caring children. She and her husband owned a gift shop called “Afloat and Ashore” at the old farmers market on Congress Ave during the 1970’s. They sold nautical and Polish gift items. Darlene always had the ability to make anyone whom she met feel welcome. She was a great bowler and was a member of several leagues in West Palm Beach. She liked to play cards, especially pinochle and was quite skilled at the game. She also loved going to Vegas and rolling dice at the crap table — she was quite skilled at that too! She loved living in her community of La Pinata in Greenacres, Fl. She was always excited to explore new and adventurous experiences. She enjoyed traveling. She went on several cruises. She loved sports of all kinds. Her favorite was tennis. She and her son Rich attended Wimbledon in England. She loved to entertain and organize great theme parties. As a matter of fact, even at the age of 90, she was planning a party in her community for people aged 80+ and wanted everyone to dress in the era of the 20’s and 30’s! She was also an active member of the Red Hatters! Darlene was the most genuine and kind person you could ever know. She always put everyone else first. She was the greatest of the “Greatest Generation”. While on this earth she did God’s work at it’s finest and now has received her promise and reward for a job well done — eternal life in Heaven. Funeral arrangements are as follows: Palms West Funeral Home 110 Business Park Way Royal Palm Beach, FL 33411 Telephone: (561) 753-6004 Email: [email protected] Friday, June 24, 2016 from 6 to 8pm — A Wake will be held at Palms West Funeral Home. Saturday, June 25, 2016 at 11:00am — A Funeral Mass will be celebrated at St. Luke’s Catholic Church located at 2892 S. Congress Avenue. Palm Springs, FL 33461 — Phone: (561) 965-8980

The family of Darlene Rose Bednarczyk created this Life Tributes page to make it easy to share your memories.