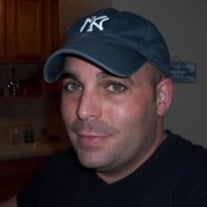 Danny passed away on August 20, 2021 after a short and courageous battle with cancer. Danny was born on January 14, 1976 in Jersey City, New Jersey. After he finished kindergarten the family moved to West Long Branch, New Jersey. It was there Danny attended grade school and met his childhood friends, whom he kept in touch with throughout his whole life. In May 1998 Danny graduated from Monmouth University. He was the first Rudden to graduate from college and he did so with honors. In 2004 he moved to Florida and that was where he met Vicky, the love of his life. They were married on May 24, 2014, and had their beautiful son, Danny on August 15, 2019. Danny and Vicky had a perfect love. They adored each other and showed us all what true love is. Their love of coffee and roasting beans sparked them to open Crux Coffee Roasters in 2016. Crux was Danny's passion. His vision was to make high-quality coffee more mainstream, giving customers the opportunity to try different coffees from around the world. Danny accomplished this and built a place where people felt welcome and comfortable. He formed bonds and friendships with many at Crux over the years. Danny was a bright light in this world. He touched the lives of so many people. Being around Danny made you want to be a better person. He was an inspiration to many and will be missed by all. Danny is survived by his loving wife, Vicky, and their beautiful 2 year old son, Danny. He is also survived by his parents, Dan and Kathy Rudden, his sister, Katherine Rudden, as well as aunts, uncles and cousins. Visitation will be on August 26, 2021 from 10am - 12pm at Palms West Funeral Home and Crematory, 110 Business Park Way, Royal Palm Beach, Florida, 33411. Funeral Mass to follow at 1pm at St. Rita Catholic Church, 13645 Paddock Drive, Wellington, Florida 33414.

Danny passed away on August 20, 2021 after a short and courageous battle with cancer. Danny was born on January 14, 1976 in Jersey City, New Jersey. After he finished kindergarten the family moved to West Long Branch, New Jersey. It was... View Obituary & Service Information

The family of Daniel Rudden created this Life Tributes page to make it easy to share your memories.